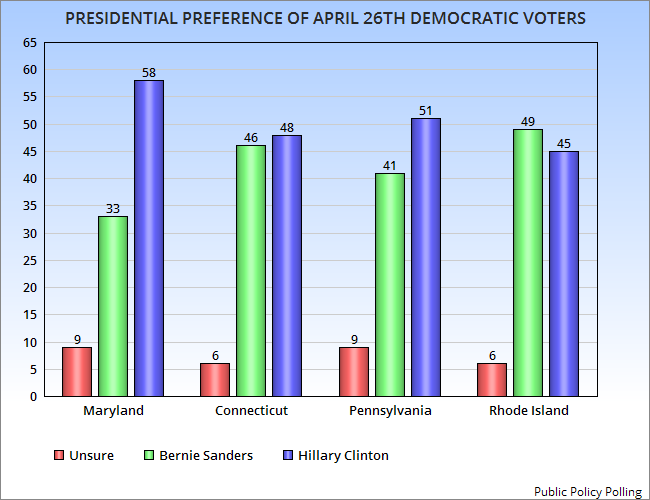 Public Policy Polling has released its final surveys of four of the states voting today in Democratic primaries -- Maryland, Connecticut, Pennsylvania, and Rhode Island. Their numbers, except for Maryland, look a little better for Sanders than some previous polls have shown. They have him four points ahead in Rhode Island, two points behind in Connecticut, and ten points down in Pennsylvania.

That means Sanders could win Rhode Island, Connecticut, and Delaware (which has not been polled). But the victories, if they happen, would just be moral victories -- and he needs to do much better than that. The truth is that to have a shot at the nomination, he needs to win 70% of the delegates in the remaining states -- and he will come far from doing that in any of the April 26th states.

Today's voting will just get Clinton closer to the Democratic nomination, and make it much harder for Sanders to compete.
Posted by Ted McLaughlin at 12:04 AM