Presidential Race Could Be Closer Than You Think In Texas 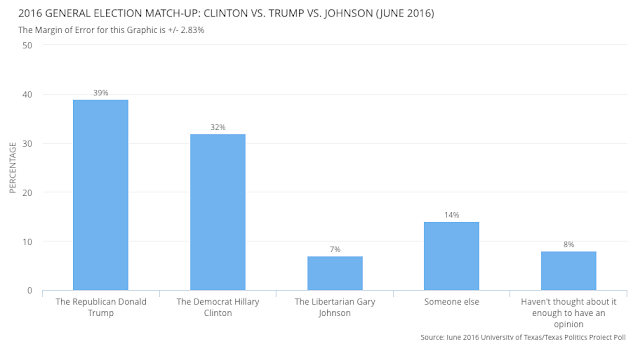 The University Of Texas / Texas Politics Project Poll has been released, and it shows that Texas may not be as red in the 2016 presidential election as many might think. The poll was done between June 10th and 20th of a random sample of 1,310 Texas voters, and has a margin of error of 3.5 points.

This poll shows Trump is only polling about 39%, while Hillary Clinton has 32% -- a 7 point deficit. Libertarian candidate Gary Johnson has 7% while 14% say they support "someone else" and 8% say they are currently unsure who they'll vote for (if they vote at all). That's a very poor showing for the Republican candidate -- and shows many are reluctant to climb on board his faltering bandwagon.

It's also possible that the 14% who say they support someone else are mostly Sanders supporters, who still cling to the vain hope that a miracle will happen and Sanders will be nominated. A few of them will vote for Jill Stein of the Green Party, but most of them will ultimately fall in behind the Clinton bandwagon -- and that could put Clinton even closer to Trump.

It is still unlikely, and it will take a lot of hard work by the Democrats, but this election is the best chance in many years for Democrats to win the electoral votes of Texas. It just might happen!
Posted by Ted McLaughlin at 12:04 AM