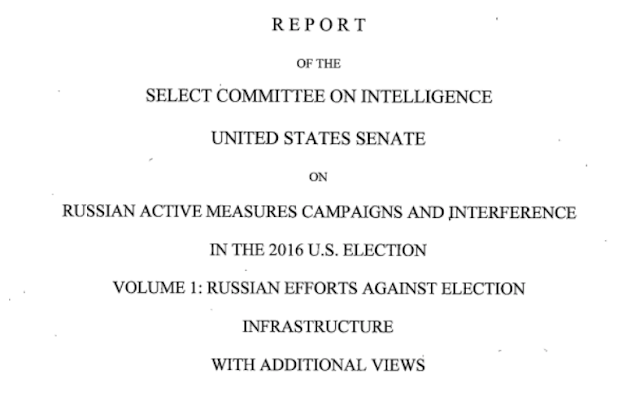 The Senate Intelligence Committee has released the first volume of its report on Russian interference in the 2016 election -- and it found that it was far worse than had been thought. It wasn't just some states that the Russians hacked -- it was all 50 states. And the voting machines used were vulnerable. They don't think actually vote totals were changed, but the Russians continue to interfere, and they might be able to do that in 2020, because most states are still using the same vulnerable election processes.

And sadly, the Republicans in Congress (especially Majority Leader McConnell) is blocking all attempts to enhance the election security.


The Senate Intelligence Committee released abipartisan report Thursday on Russian election interference that found the U.S. election infrastructure was unprepared to combat “extensive activity” by Russia that began in 2014 and carried on at least into 2017.
The report was issued just one day after former special counsel Robert Mueller warned U.S. lawmakers that he believes Russia will seek to interfere again in the 2020 campaign and that “many more countries” are also developing similar capabilities.
“In 2016, the U.S. was unprepared at all levels of government for a concerted attack from a determined foreign adversary on our election infrastructure,” Sen. Richard Burr, R-N.C., chairman of the Senate Intelligence Committee, said in a statement.
The 61-page report — based on interviews with state election officials, Obama administration officials and government and intelligence community officials — is just the first volume of the findings of the committee's investigation. It includes eight pages of recommendations to shore up the country’s election infrastructure to prevent future interference.
The report found that the Russians took advantage of the nation's decentralized voting system, “exploiting seams” between federal oversight and state election systems. It also found that election cybersecurity was “sorely lacking” in 2016 and that federal attempts to warn states about potential security breaches "did not provide enough information or go to the appropriate people."
Election databases weren’t as secure as they should be, according to the report, and aging voting machines with no paper trail were vulnerable.
For instance, in one state, which was not named but identified as “state 7,” the password to the machine was as simple as “ABC123” and the people testing the machines could easily switch the machines into supervisor mode and tamper with the votes to “call the results into question.”
The communication between the Department of Homeland Security to the states in 2016 was insufficient and lacked context, the report notes. Twenty-one states said they found out about possible interference from the media or the Intelligence Committee’s hearing on the topic in 2017. . . .
The committee recommends that states purchase more secure voting machines, including voting machines with a paper trail. It recommends audits of voting machines and security audits.
It also suggests that election cybersecurity needs to be a bigger national priority and that the United States should communicate to other world leaders that an attack on U.S. elections would be seen as a hostile act. . . .
The subsequent volumes of the committee’s investigation will cover the intelligence agencies’ assessment of Russian interference, the Obama administration’s response and the role of social media disinformation campaigns.
Posted by Ted McLaughlin at 12:02 AM