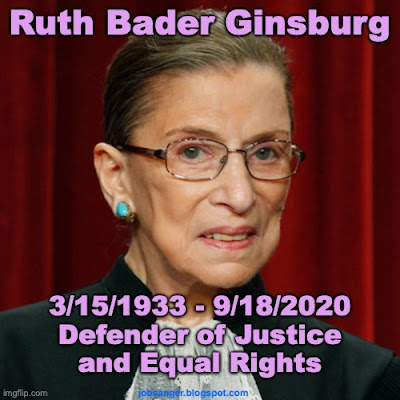 America has suffered a great tragedy. At the age of 87, Supreme Court Justice Ruth Bader Ginsburg has died.

She will always be remembered for her fight for equal rights for all Americans and her strong belief in justice for all.

She had been ill for a while now, but had held on to her position on the court to prevent Donald Trump from appointing her replacement. Sadly her failing health would not let her complete that mission.

She will be sorely missed, and will go down in history as one of our greatest Supreme Court Justices.

There is no doubt that Trump will try to appoint a replacement, and Mitch McConnell has said he would try to push any Trump nomination through the Senate -- in spite of the fact that he refused to even consider an Obama nomination four years ago with only months left in his term.

The Republicans have enough senators in this Congress to approve a Trump nominee if they want. Our only hope is that a few senators, struggling to get re-elected, will vote to stop the nomination (of a Kavanaugh-like candidate). Any nomination is going to be controversial, and the Senate might not want to take action close to the election. But there will be two months after the election in which to act -- and they probably will.

This will likely insure a right-wing and corporate-friendly court for many years to come.