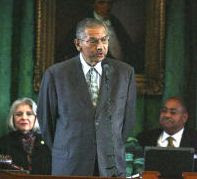 We learned yesterday that Texas still produces heros - giants willing to sacrifice personally for the good of all Texans. State Senator Mario Gallegos is just such a man.
Senator Gallegos underwent a liver transplant in January, and still has not recovered from the very serious surgery. Last Friday, he underwent more surgery to determine whether the transplant had become infected. His doctors wanted him to stay in the hospital where they could monitor his progress.
But on Monday, Gallegos was back in Austin. He has a hospital bed set up in the building where the Senate meets, only a short walk from his senate desk. Risking his own health, he is back to protect the voting rights of all Texans.
It takes a 2/3 majority to bring a bill to the floor for a vote in the Senate. So far, by sticking together, the senate Democrats have been able to deny a floor vote for the very bad Republican Voter ID bill. But there are only 11 senate Democrats, and if even one is absent then the Republicans would have their 2/3 majority.
That is why Senator Gallegos is back in Austin, despite doctor's orders. He said, "I can remember my grandmother, who was born in Mexico and became a citizen. She would not be able to vote if this bill had been the law of the land. I haven't heard any complaints, at least in my district, that illegal aliens are voting. I haven't heard of a single instance since 1991, when I took office."
Gallegos says he will stay until there are only 12 hours left in which to bring a bill to the floor. He said he believes his fellow Democrats can filibuster the last 12 hours.
I have to admit that I did not know much about Senator Mario Gallegos until now. But after his courageous action, he is definitely on my list of heroes now.
Thank you Senator Gallegos for caring about all Texans, even those who did not know you. You're a shining example for Democrats everywhere.
Posted by Ted McLaughlin at 7:34 AM