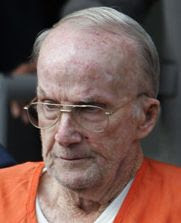 In 1964, a vile crime was committed in southwest Mississippi. The Ku Klux Klan (KKK) kidnapped two 19 year-old African-American men, Charles Moore and Henry Dee. They took them into the woods and brutally beat them. Then they stuffed them into the trunk of a car, drove them to Louisiana, attached weights to them and threw them alive into the Mississippi River to drown.
Moore and Dee were not activists or criminals. They were just two innocent youths trying to hitchhike to the next town. They were not kidnapped and murdered for anything they did. They were murdered by racists because of the color of their skin.
Klansman James Ford Steele was arrested in Mississippi in 1964 and charged with their murder. But the South was not ready to mete out justice to klansmen at that time, and the charges were dropped. Justice would have to wait another 43 years.
Last January, Steele was arrested again. Federal prosecutors had indicted the 71 year-old on two counts of kidnapping and one charge of conspiracy. Yesterday, a jury found Steele guilty of his heinous crimes. He will be sentenced to life in prison in August.
Some might wonder about the propriety of convicting a 71 year-old of a crime that happened 43 years ago. I am not one of those. I was a teenager myself during those bad years in the South, and I celebrate his conviction. He deserves to die in prison.
We must never forget or forgive the horrible racist crimes in our nation's past.
Posted by Ted McLaughlin at 6:28 AM