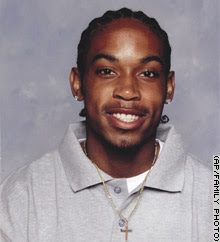 Genarlow Wilson was an honor student as a senior in high school with a 3.2 grade point average. He was also an excellent athlete with several colleges offering him scholarships to play football at their school. The future looked very bright for that 17 year-old.
But that was before he and his buddies threw a New Year's party. At that party, fueled by alcohol and marijuana, several sex acts took place and were videotaped. A 15 year-old sophomore girl initiated sexual contact with Wilson, and willingly gave him oral sex.
Since that time, life has been a nightmare for Wilson. If he had engaged in consenting intercourse with the girl, it would have been a misdemeanor. But at the time, Georgia law defined the oral sex as a felony (probably due to southern homophobia). Wilson would up with a minimum 10 year prison sentence, even though the jury later said they had no idea his sentence would be that harsh.
The Georgia legislature later made this "crime" a misdemeanor, but neglected to make the new law retroactive.
After serving two years in prison, which any decent human would think was enough, it looked like Wilson's luck might be changing. On Monday, Superior Court Judge Thomas H. Wilson reduced the sentence to one year and said Wilson would not have to register as a sex offender.
The judge said in his ruling, "If any case fits into the definitive limits of a miscarriage of justice, surely this case does. The fact that Genarlow Wilson has spent two years in prison for what is now classified as a misdemeanor, and without assistance from this court will spend eight more years in prison, is a grave miscarriage of justice."
But instead of treading the decent path and letting Wilson out of prison, the prosecutor immediately appealed, insuring that Wilson would remain in prison. Wilson's attorney B. J. Bernstein said, "It is extremely, extremely disturbing that the Attorney General would take this action now." She said she did not know what message "he's trying to send".
I think the message he's trying to send is pretty obvious -- and it's a racist message. African-Americans simply can't expect the same brand of justice in Georgia as whites. Compare this case to the recent case in which a white school teacher had sexual relations with students (a real example of criminal sex abuse) and only received a 9 month sentence.
When this case was appealed to the Georgia Supreme Court, they denied his release 4-3. Three African-American justices voted in his favor, and four white justices voted against him.
It looks to me like racism is still alive and well in Georgia.
Posted by Ted McLaughlin at 7:34 AM