Wireless Energy On The Horizon 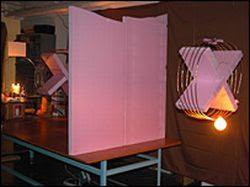 Wouldn't you love to get rid of all those wires currently delivering power to your many electrical devices? You may be able to in the near future.
Researchers from the Massachusetts Institute of Technology have shown how it can be done. They have successfully transmitted energy without wires to light a light bulb about 7 meters away. When objects were placed between the sending and receiving stations, it had no effect on the power transfer.
They did it by using the well-known effect called "resonance". Two objects with the same resonance frequency will strongly exchange energy without having an effect on surrounding objects (that are on a different resonance frequency). WiTricity, as it is called, uses very low frequency electromagnetic waves.
Right now the sending and receiving stations (the coiled apparatus' in the above picture) are fairly large, and they can send the energy with only 40% efficiency. The next step is to reduce the size and improve the efficiency.
I can hardly wait to get rid of all the wires.
Posted by Ted McLaughlin at 7:00 AM