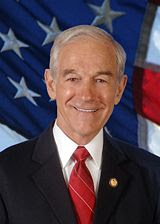 Fox News has claimed to be "fair and balanced", but most people know they are little more than a public relations organ for the Republican Party. They have never been either "fair" or "balanced", and this last weekend they again proved that.
It turns out they do not represent all Republicans, but only those Republicans that hold corporatist views. They showed this when they shut Ron Paul out of the GOP Debate in New Hampshire.
Most of the time when a candidate is not included in a debate, it is because the candidate doesn't have enough money or support to compete with the rest of the field. But that was not true of Ron Paul. He was polling equal to Guiliani and better than Thompson, both of whom are included in the debates. Paul also raised over $20 million in the last quarter -- easily enough to keep him competitive.
No, Paul was not excluded because he's not competitive. He was excluded because he doesn't go along with the Republican establishment corporatist viewpoint, and his own views are starting to get some attention. That scares the hell out of the establishment Republicans. Huckabee scares them in the same way, but after his win in Iowa there was no way they could exclude him.
By excluding him, Fox News and the Republican establishment were hoping to convince voters that Paul is a fringe candidate and not worthy of consideration. I doubt if the move will have the desired result. Paul's supporters are a pretty loyal group, and the exclusion may actually get him some backlash votes from people who think the exclusion was unfair.
In fact, the backlash may have already begun. The state Republican Party withdrew it's support of the debate. Their withdrawal statement said, "The first-in-the-nation New Hampshire primary serves a national purpose by giving all candidates an equal opportunity on a level playing field. Only in New Hampshire do lesser known, lesser funded underdogs have a fighting chance to establish themselves as national figures. Consistent with that tradition, we believe all recognized major candidates should have an equal opportunity to participate in pre-primary debates and forums. The New Hampshire Republican Party believes Congressmen Ron Paul and Duncan Hunter should be included in the Fox forum on Sunday evening....it is with regret, the New Hampshire Republican Party hereby withdraws as a partner in this forum."
Once again, Fox News shows how unfair and unbalanced it really is.
Posted by Ted McLaughlin at 12:03 AM