Moffat To Run In District 98 As Democrat 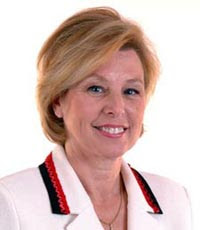 Texas House District 98 covers the northeastern part of Tarrant County, and includes Colleyville, Grapevine, Southlake, Keller and part of north Fort Worth. For three terms, Republican moderate Nancy Moffat represented the district. About 10 years ago, she was defeated in the Republican primary by rabid right-winger Vicki Truitt, who currently represents the district.
Now Moffat has filed to run again for District 98 Representative, but this time she filed to run as a Democrat. Moffat said, "It wasn't so much that I left the Republican Party as much as it was that the party left me. They're all about the wealthy, and I want to be for the little guy and the middle guy."
Moffat has told Tarrant County Democratic chairman Art Brender that she supports children's health insurance, opposes school vouchers and opposes Speaker Craddick. She also says she is "OK" with the pro-choice position (whatever that means).
Now don't be misled -- Moffat is no liberal. She is a moderate at best. But if she truly supports the above positions (especially anti-voucher and anti-Craddick), then I am happy to have her running as a Democrat and I hope she can win the race.
This is the reddest area of Tarrant County, and many times the Democrats have not even been able to field a credible candidate in District 98. Moffat is a credible candidate, and has an outside chance of actually beating Truitt. That's good enough for me.
Welcome to the Democratic Party Nancy Moffat!
Posted by Ted McLaughlin at 12:04 AM