Can The Panhandle Turn Blue ? 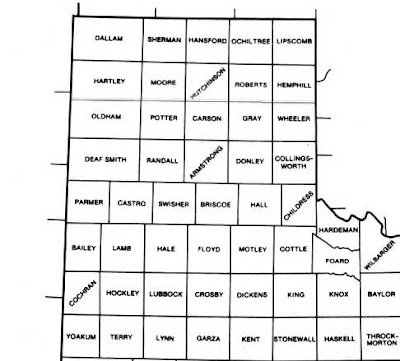 Those of us that live in the Texas Panhandle know it to be one of the reddest areas in the state. For years now, it has been almost impossible to be elected to anything in this area unless you identified yourself as a Republican. But does it have to be that way? Maybe not.

There are two demographic trends happening in the Panhandle and South Plains area, and these population trends could change West Texas from red to blue. These two trends are a declining population in many counties, and an emerging Hispanic majority in the area.
Except for Amarillo and Lubbock, almost all of the counties of the Panhandle and South Plains have a declining population. This is not new, but has been going on for decades. Especially in the smaller counties, young whites are moving away because jobs and other opportunities are disappearing. Many who leave for college or jobs simply don't come back.
Here are the top 10 counties in terms of population loss, and the percentage of that loss just in the period from 2000 through 2006:
King...19.4%
Kent...14.6%
Cochran...13.8%
Dickens...12.7%
Motley...10.5%
Castro...10.1%
Floyd...9.2%
Collingsworth...8.6%
Wheeler...8.1%
Sherman...7.8%
At the same time, Hispanic families are staying together in the area, and taking what jobs do exist such as the growing number of jobs on dairy farms. Add to this an influx of workers from south of the border, and you have Hispanic majorities beginning to emerge and grow stronger with each passing year.
Hispanics now make up the majority in 11 West Texas counties at this time. These are the counties with their Hispanic and white populations:
Bailey...3387, 2970
Castro...3886, 3170
Cochran...1576, 1406
Crosby...3175, 2946
Dawson...7029, 5641
Deaf Smith...11,599, 6660
Floyd...3347, 3257
Hale...17,532, 16,526
Moore...10,638, 9320
Parmer...5383, 3947
Yoakum...3750, 3447
There is no reason to believe either of these trends won't continue. With each passing year, West Texas is going to grow more demographically similar to South Texas. There is no reason to believe they won't start to vote the same way also, especially if the Democrats did some serious organizing and registration. With a concerted effort, West Texas could turn blue even faster than most people think.
Now you may think that even with the smaller counties turning Hispanic, the larger cities such as Amarillo and Lubbock could keep the area red. Not necessarily.
Amarillo was 22% Hispanic and 6% African-American in the last census (and showed a 63.35% increase in Hispanics over the previous census). It would only take about 30-35% of whites to join these groups and vote Democrat to turn Amarillo blue (and it could be done with a good organizing and registration effort).
Lubbock is even closer than Amarillo. In the last census, Lubbock was 27.45% Hispanic and 8.66% African-American. It would take an even smaller percentage of whites to flip Lubbock. And remember, the Hispanic part of the population is going to grow even in the cities.
It may not happen this year, but the trends in the Panhandle and the South Plains will result in them going Democratic one of these days. With a little effort by Democrats, it could happen sooner rather than later -- but it will happen.
Posted by Ted McLaughlin at 12:02 AM