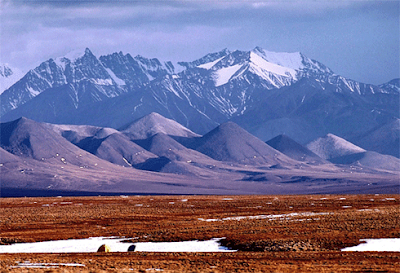 Since the Republicans came to power a few years ago, this country really hasn't had an energy policy that made sense. For the Republicans, energy policy means letting the big oil companies do whatever they want. Since Bush and Cheney, both oilmen, came to power they have single-mindedly pursued this policy -- even to the extent of starting an unnecessary war to provide access to Iraqi oil for their oil company buddies.
Another favorite pet project of the Republicans is to open the Arctic National Wildlife Refuge to massive oil drilling. Bush has tried to get this done since coming to office. It doesn't seem to matter to the Bush and the Republicans that this would ruin one of our last pristine wilderness areas (and add to the carbon-based pollution ruining our planet).
This week they tried again to get it approved, and once again they were stopped by Democrats. Senate Democrats (joined by six sensible Republicans) killed the bill on a 56 to 42 vote.
This is just one more reason to elect solid majorities of Democrats this coming November. We need to keep the big oil companies out of ANWR, and we also need to develop a sensible and sustainable energy policy. The only way to do that is to give Democrats a working majority in the Senate, and put a Democrat in the White House.
For far too long we have paid lip service to finding alternate energy sources and more efficient technologies, while letting the oil companies set our energy policy. It is time to get serious.
Posted by Ted McLaughlin at 12:02 AM