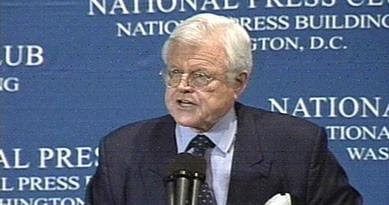 Senator Edward Kennedy and his family have received some bad news. He has been in the hospital the last couple of days after suffering a seizure, while doctors tried to determine the cause. Yesterday, the doctors revealed the seizure had been caused by a malignant brain cancer.
The type of cancer found is an especially aggressive and lethal type. Some experts are saying he may have less than a year to live. Currently doctors are investigating the tumor further to see how to attack it. Usually a combination of radiation and chemotherapy is used to fight this type of brain tumor.
At his age (76) this will be a tough fight, but not impossible. Another senator, Arlen Specter, was able to come back after this type of tumor (although it has since returned).
Senator Kennedy carries with him the hopes and best wishes of millions of liberals and other Americans. He has been in the U.S. Senate since 1962, and since that time he has been a bulwark of liberalism. Even when the Republicans took over Washington and many other Democrats were moving to the center, Kennedy remained true to his liberal roots and beliefs.
All Democrats owe Kennedy a debt of gratitude for his loyal service to his party and his country. I wish him the best and hope he has a speedy recovery. He is needed.
--------------------
Another Democratic leader has just died. Hamilton Jordan, President Carter's Chief of Staff, died after a long fight against cancer. He was largely responsible for taking an unknown governor all the way to the White House. He served his country well and deserves the respect of all Democrats.
Posted by Ted McLaughlin at 12:02 AM