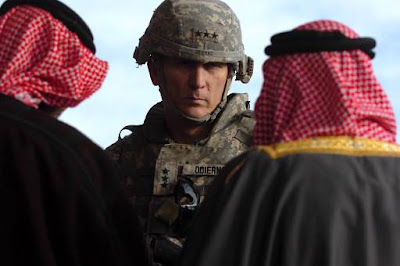 Yesterday, McCain showed that although he has military experience, he doesn't understand the situation in the Arab world and in Iraq any better than Bush did. He either misunderstands the situation or he's just outright lying about it.
Still smarting from his statement about leaving troops in Iraq for 100 years, McCain yesterday predicted the United States would achieve a victory in Iraq by the year 2013. I don't know what gives him the idea that any kind of victory can be achieved there -- even in another five years. There is absolutely nothing that shows any progress has been made. Why would that change just because another five years passes?
He predicted that because of this victory, most United States troops could be withdrawn by 2013. Note that he said most, not all troops could be withdrawn. He still wants to leave some troops in Iraq indefinitely. Why? To protect the interests of the big oil companies?
This just shows he really doesn't understand what is driving the Arab anti-Americanism, and indeed the terrorists also. Has he really bought into the Bush fiction that they hate us for our freedom? I thought even he could see how silly that idea was, but maybe I was wrong.
The Arabs don't care if we're free or not. What they do care about is American troops stationed on their soil. That was the major reason for 9/11. It was a retaliation by the terrorists for American troops being stationed in the Arab world.
If we had left Iraq a couple of years ago, the Iraqis might have settled their differences by now. But as long as we are there, the war against American troops will continue. There can be no victory because the reason they fight us is simply because we are there. If troops are left there, there will be no peace.
McCain is trying to make people believe he is different from Bush, but he's not. He shares the neocon belief that military power can achieve a victory in Iraq. If Bush couldn't do it, why should we believe McCain can do it following the same policy?
McCain has swallowed the Bush lie that we're trying to save the Iraqis. We are not. All we are doing by having troops there is inciting further violence. If McCain is elected, the war and the killing will just continue unabated as it has since 2003.
The Arabs don't hate Americans. They hate America trying to push them around with it's military power.
Posted by Ted McLaughlin at 12:03 AM