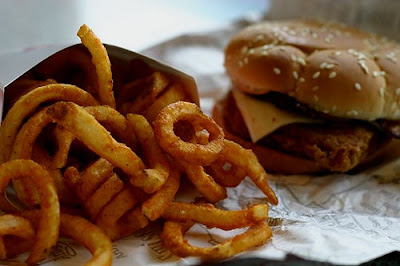 The "Nanny State" is alive and well in Los Angeles. The city council has decided that poor people in that city are too stupid to make their own choices, so they're going to force them to make the right choices. After all, the city council members are so much smarter than poor people.
In their infinite wisdom, the council has decided that poor people in Los Angeles are too fat. To remedy this situation, they have banned the opening of any new fast food restaurants in an impoverished part of the city for at least one year. They say it's to give the area time to attract healthier food outlets.
This is just stupid. When did it become the government's job to force people to eat "healthier"? What happened to freedom of choice? Of course, by banning the fast food joints, they are also banning the new jobs they would bring to the area. It would seem to me that jobs are exactly what is needed in a poverty-stricken part of town.
I don't have any problem with the government or any private group trying to educate the public on how to live a healthier lifestyle (or anything else). That is just free speech. But when actions are banned by the government, that is just wrong. In a free country, people should be able to make their own choices, even if those choices are not good ones.
It's ignorant and elitist thinking like this that makes me glad I don't live in Los Angeles.
Posted by Ted McLaughlin at 12:05 AM