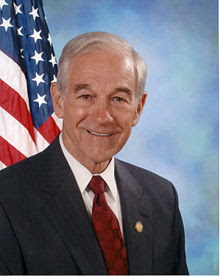 The Republicans want Americans to believe the Democratic Party has a split between Obama and Clinton, and they're doing everything they can to try and make it a reality. But the reality is that Democrats came together at their convention. Hillary and Bill Clinton showed a lot of class last week by stepping forward and urging all Democrats to support and work for Barack Obama.

But the Republicans have a real split in their own party, which could turn out to be a real embarrassment this week in Minnesota. They don't just have one convention where all Republicans can come together to support a single candidate. In addition to the convention that is meeting to nominate John McCain, there will also be a rump convention composed of the followers of Ron Paul (pictured above).

Rep. Paul said he had made overtures to the Republicans, hoping to speak at their convention. But he was rebuffed, and that may turn out to be a serious mistake. Now his supporters are gathering in Minnesota for their own "convention", and it won't be a small one either. They have sold nearly 10,000 tickets to the affair.

Paul and his supporters are the ones who believe in small government, a balanced budget, individual rights, the Constitution, and the illegality of using our military to force our views on others. Meanwhile, the national party is supporting a president and candidate who have given us a record-breaking national debt, an unnecessary war, a violation of individual rights (spying on citizens), a violation of human rights (torture), and a trashing of our Constitution in numerous ways.

If the Republicans had been smart, they would have just allowed Paul to speak at their convention. But they weren't. Now they're faced with the prospect of dueling conventions. It should be an interesting week.