Where's The Respect For LBJ ? 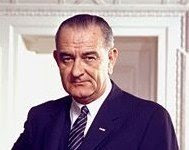 Did I blink and miss it, or did this Democratic convention totally ignore former-President Lyndon Baines Johnson. To make it even worse, yesterday was LBJ's 100th birthday. He was born on August 27, 1908 in a small farmhouse on the Pedernales River near Stonewall, Texas.

Even though he is no longer with us, the 100th birthday is kind of a landmark. Would it have hurt the Democrats to take 5 minutes to mark the occasion?
It's not like he was a terrible president. In fact, I think he was a good president, and Democrats should be proud of him. I guess the Vietnam War will always cast a shadow over his presidency, and I admit that I disagreed with him on the war. But he also did a lot of good for America.
Does anyone remember the War on Poverty, the Headstart Program, Medicare and Medicaid? These were all LBJ's programs, and they still do a lot of good for a lot of people in this country.
In addition, LBJ helped to lay the groundwork that resulted over 40 years later in Barack Obama being able to become the nominee of his party. I don't think the Civil Rights Act of 1964 or the Voting Rights Act of 1965 could have been passed without LBJ. It took a president with his enormous political skills and political courage to get the job done.
LBJ knew passing these laws were going to lose himself and the Democratic Party a lot of support in the South (and some other parts of the country). He had a choice -- he could do the politically expedient thing or the right thing. He chose to do the right thing!
Some of today's Democrats could use the political courage displayed by Lyndon Johnson.
Posted by Ted McLaughlin at 12:05 AM