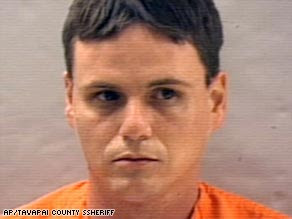 This story really bothers me -- a lot. Neil Havens Rodreick II is a 30 year-old sex offender who served 6 years in Oklahoma after lewdly propositioning a 6 year-old boy. He was supposed to register as a sex offender after his release, but instead he leaves and goes to Arizona. Once he gets to Arizona, the story really gets weird.
Shaving and using pancake make-up, this criminal is actually able to enter school as a seventh-grader. In fact, he is able to pull off this hoax at three different schools and no one figured it out. School officials and teachers accepted him as a seventh-grader named "Casey". It was not until he entered a fourth school, that school officials were suspicious of his paperwork and notified police.
When police went to his home, they found him living with three other men (and two of them were convicted sex offenders). They also found around 600 pieces of child pornography, including one tape of Rodreick having sex with a 10-13 year-old boy in a motel room.
Rodreick grabbed a girl's butt at one school, but police have been unable to uncover any other sexual activity at any of the schools. He plead guilty to several charges including assault, fraud, failing to register as a sex offender and sexual exploitation of a minor. He will be receiving a seventy-year sentence without the possibility of parole.
I don't have any problem with the seventy-year sentence -- he deserved it. What does bother me is the fact that he got away with his sick scheme at three different schools. How is this possible?
Posted by Ted McLaughlin at 12:05 AM