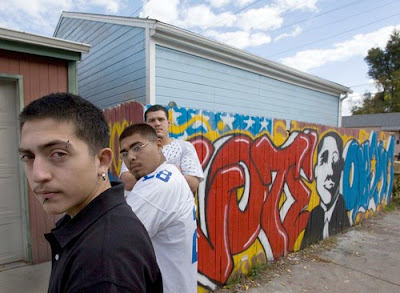 The three teenagers above are Denver street artists. They are Paul Trujillo (16), Chris Balderas (19) and Noe Salido (19). Henry and Esther Vigil are Paul's grandparents, and they are justifiably proud of his talent. Instead of his normal street graffiti, they encouraged him to paint something more serious and donated their back fence for a mural.
Paul and his two friends took them up on the offer. Inspired by the Democratic Convention that came to their home town and cognizant of the need for change, they painted a 26-foot long mural of Barack Obama on the fence. The teens and the Vigils considered the mural to be art. But the city of Denver did not.
The politicians running Denver decided the mural was just another political sign, and as such, it was in violation of city law. The city code doesn't allow any political signs over 8 square feet. The city officials say the word vote contained in the mural makes it a political sign. They have told the teens they must paint over their mural.
If the family does not paint over the mural, they face a $150 fine, which would grow larger over time. But some consider the mural to be art rather than a political sign. If it is art, it would be protected by federal law, but if it is a political sign then it must be painted over.
I think a couple of things point to it being art. First, it has the respect of other street artists. They treat it as a mural and have not "tagged" it as they would a large sign. Second, the mural has drawn visitors from all over the area, who visit and take pictures. When was the last time you saw people drive across town to take pictures of a political sign?
Personally, I think the city has over-reacted on this. I believe it is art, and it should be treated as such. What do you think?
Posted by Ted McLaughlin at 12:03 AM