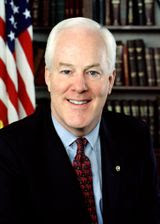 Yesterday, George Bush ended his term in Washington, climbed on an airplane and flew back to Texas. While this was a cause for world-wide celebration, it did leave a void in Washington. Who was going to fill the position of "Biggest Idiot Politician from Texas"? But never fear folks, because a viable candidate has stepped forward -- John Cornyn.

Cornyn bid for the position back in 2004, when he compared homosexual marriage to marrying a "box turtle". Under normal circumstances, that would probably have earned him the crown. But Bush was still in Washington, and screwing up on such a scale that no one could equal him. So Cornyn had to wait for his chance.

But when it came to Hillary Clinton as Secretary of State, Cornyn objected. He was the only senator to object, but all it takes is one to kill the unanimous voice vote. She will still be overwhelmingly approved today with a roll call vote after three hours of debate.

Cornyn said he wanted to know more about donations to her husband's foundation. That's a load of crap! There will be three hours of debate, but I can assure you that nothing new will be learned. There will be no new witnesses and no new evidence introduced. Senators will simply banter back and forth for three hours and then approve Clinton.

Cornyn knows he cannot win this battle, and doesn't really care. He was simply playing to the ultra-right of the Republican base to get himself noticed. That's why he picked Hillary Clinton. He knows the ultra-right hates her. Opposing one of the other cabinet members wouldn't have gotten him nearly as many "brownie points" with the wing-nuts.

I hope he succeeded. I'd like to see him become a darling of the right. Maybe they'll run a Palin/Cornyn ticket against Obama in 2012. I'd love to see that. The incompetence would be so overwhelming, it could be the death knell of the Republican Party.

I'm ready to crown Cornyn as "Biggest Idiot Politician from Texas". Can you think of a better candidate?
Posted by Ted McLaughlin at 12:04 AM