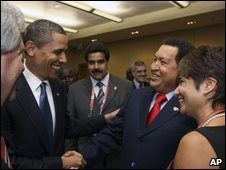 Once again, the Republicans are showing us just how devoid of ideas they really are. For the last couple of days, they have been expressing outrage over nothing more than a smile and a handshake.

During the Summit of the Americas, President Obama smiled and shook hands with Venezuela's president Hugo Chavez, just as he did with the leaders of the other Latin American and Caribbean nations. But for some reason, they would like for us to think that there's something wrong with smiling and shaking the hand of President Chavez. Listen to some of their comments.

Newt Gingrich -- "Everywhere in Latin America, enemies of America are going to use the picture of Chavez smiling and being with the president as proof that Chavez is now legitimate, that he is acceptable."

Senator Ensign -- "This is a person who is one of the most anti-American leaders in the entire world. He is a brutal dictator, and human rights violations are very, very prevalent in Venezuela. And you have to be careful." He went on to say it was "irresponsible" for Obama to be "laughing and joking" with Chavez.

David Gergen -- "I think most political advisers would tell the president, you know, it's fine to shake hands, hold the smiles."

Gingrich's statement is ludicrous on its face. Has he not been paying attention to what has been happening in Latin America in the last few years? Except possibly for Columbia's Uribe, Hugo Chavez is already both legitimate and acceptable to the other leaders south of our own border. No matter how much Gingrich and Ensign would like for us to believe Chavez is illegitate and a dictator, the people of Latin America and their leaders know better.

Hugo Chavez is the DULY ELECTED president of Venezuela. In fact, he has been elected twice by large majorities (which is more than can be said about the last Republican president of the U.S.). And I have to wonder if Chavez is guilty of any worse human rights violations than George Bush (who is a torturer and war criminal who spied on his own citizens). I doubt it.

Gergen is the most disappointing though, since he is generally regarded as a moderate Republican. Is he really faulting the president because he smiled when he shook Chavez's hand? How ridiculous!

In this hemisphere (and generally around the world), it is considered a serious breach of etiquette and good manners not to smile and shake a person's hand when you meet them. I guess they want President Obama (and by proxy all Americans) to be considered rude by the people of Latin America (probably because their small-minded hero, George Bush, would have acted rudely).

Haven't we had enough of being the "Ugly Americans"? Isn't it time for us to start making friends instead of enemies? Shouldn't we stop trying to force our views on other countries and start working together for the mutual benefit of everyone?

You cannot solve differences with others by acting rudely and being disrespectful. A smile and a handshake won't solve all our differences with Venezuela (or Cuba), but it is where the solution must start. When you treat someone with a little respect, he/she is much more likely to listen and negotiate in good faith.

The Republicans have acted so poorly to so many for so long, that they can no longer recognize good manners and the beginning of diplomacy when they see it. They should be ashamed.
Posted by Ted McLaughlin at 12:02 AM