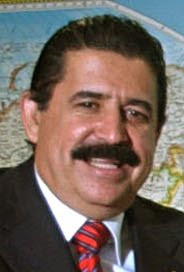 Manuel Zelaya (pictured) has been the president of Honduras since 2006, but that ended this last weekend in a political coup. The Honduran congress voted to oust him, and just before dawn on Sunday, the military took him into custody and flew him to Costa Rica.

The congress said they had removed him because of "repeated violations of the constitution and the law and disregard of orders and judgments of the institutions". However the timing of the ouster makes that a bit suspicious. He was removed by the military just hours before a constitutional election was scheduled to be held.

The election would have authorized constitutional reforms, and could have given Zelaya the right to extend his presidency (his four year term was to end in January 2010). Zelaya says he was ousted by "a plot by a very voracious elite, an elite which wants only to keep this country isolated, in an extreme level of poverty".

The timing of the ouster lends credence to Zelaya's accusations. Why not wait a couple of days and see how the constitutional election came out? Could it be that the power elite knew how it would come out? Did they know the people supported Zelaya and the reforms he was trying to bring -- reforms that the rich and powerful feared?

The United States and most of Latin America are condemning the coup. President Obama has called for Honduras to "respect the rule of law." The U.S. State Department says the U.S. recognizes Manuel Zelaya as the duly elected president of Honduras.

I applaud the action of President Obama and others in opposing the coup. South and Central America has many new democracies, and these democracies must be supported to give the people of these countries a voice in their government.

The coup signals a troubling return to the past, when the rich elite of these countries used military coups to keep their wealth and power, and to deny any change that might empower the poor. These people fear the ballot box and anything approaching a real democracy.

The congress says the new "president" will only rule until elections can be held. But what if the people elect someone else the political elite doesn't like? Will there be another coup? Is this the end of any real democracy in Honduras?
Posted by Ted McLaughlin at 12:04 AM