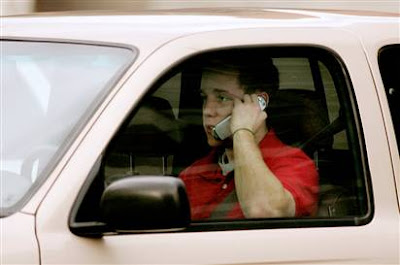 I'm beginning to wonder if there's anything the Bush administration didn't screw up. Now we learn from the New York Times that Bush asked the National Highway Traffic Safety Administration (NHTSA) to cover up the bloody facts about cell phone use while driving.

The NHTSA had information that cell phone use in 2002 caused about 240,000 accidents, resulting in nearly a thousand deaths (actually 955). The agency said driving while talking on a cell phone was as dangerous as driving with a blood alcohol level of 0.08 (which is illegal in most states). They wanted to do a larger study and release the information. The Bush administration killed the larger study and asked them to not release the information.

NHTSA said they were asked not to release the information because the Bush administration didn't want to anger Congress. I suspect it was the phone companies they didn't want to anger. At the time, they were asking these same companies to violate the law and spy on American citizens. It wouldn't do to piss them off -- they might stop co-operating and spill the beans about the illegal spying.

Of course by hiding the information, the administration was ignoring the preventable deaths of a thousand Americans each year. I guess they figured it was just the cost of covering up their hideous crimes.

NHTSA's current policy is that cell phones should not be used at all while driving. And the "hands-free" phones don't actually help at all. It's not holding the phone that creates the danger -- it's the conversation being held that creates the distraction and the danger.

None of this is rocket science. Everyone knows that a person can become so engaged in a conversation on the phone that they take their mind off their driving. Isn't it time to outlaw cell phone use while driving?
Posted by Ted McLaughlin at 12:06 AM