Hutchison Cranking Up Her Campaign 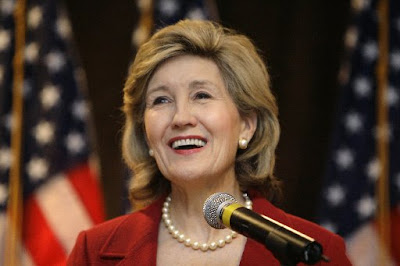 After months of some wondering if Kay Bailey Hutchison was really serious about running for governor, and a new poll that shows her trailing current governor Rick Perry, it now looks like Hutchison is beginning to crank up her campaign.

Appearing on the Mark Davis radio show in Dallas, Senator Hutchison told the conservative talk show host that she will be announcing in August that she is officially running for the govenorship of Texas. In addition, she told Chapman she would soon be resigning her senate seat. She said, "Then the actual leaving of the Senate will be sometime -- October, November - that, in that time frame."

Meanwhile, Hutchison has started attacking Perry. Her first broadside regarded Perry refusing to take the federal stimulus funds to help pay unemployment benefits. She said, "This is yet another Rick Perry disaster. Higher business taxes. Unnecessary debt. And an unemployment mess. Nothing better encapsulates our leadership problems in Austin than Gov. Rick Perry’s refusal to accept (the stimulus money)."

But Senator Hutchison doesn't really possess the high ground on the issue of stimulus funds. She voted against providing the same funds that Perry turned down. So we have two right-wing Republicans who are more interested in protecting their corporate masters than in helping ordinary out-of-work Texans buy food and pay rent.

That sounds like a good reason to vote Democratic in 2010.
Posted by Ted McLaughlin at 12:02 AM