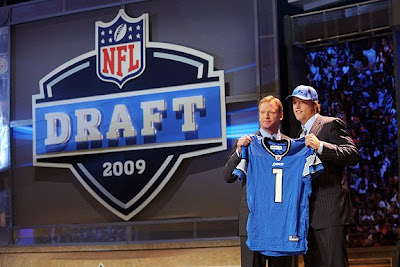 This move wasn't totally unexpected. After the last NFL draft, there was talk about moving the next one to prime time television viewing hours. But now it's official, and it starts with next year's draft.

Since 1995, the NFL draft has been a two-day affair held on Saturday and Sunday. But it's popularityhad both the NFL and ESPN eyeing prime time. This year the draft attracted 39 million viewers. Moving to prime time should create an even larger audience.

The first round of the draft will be held on Thursday night, April 22. It will start at 6:30pm CST. The second and third rounds will start at 5:30pm CST on Friday, April 23. Rounds four through seven will then start at 9:00am CST on Saturday, April 24.

Both ESPN and the NFL network will televise all seven rounds.


NOTE - It's less than a week until the Dallas Cowboys open their pre-season camp in San Antonio. Camp will open on July 29th. Football is back!
Posted by Ted McLaughlin at 12:04 AM