Outlawing Texting Is Not Enough 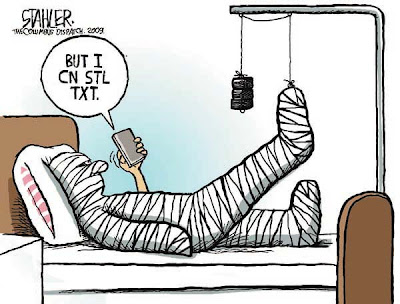 It looks like Congress finally wants to do something about dangerous cell phone use by drivers. Senators Charles Schumer (D-New York), Robert Menendez (D-New Jersey), Mary Landrieu (D-Louisiana) and Kay Hagan (D-North Carolina) have just unveiled legislation they are introducing in the Senate.

The legislation would force states to outlaw cell phone texting and e-mailing while a person is driving a motor vehicle. Any state that does not outlaw this activity will lose 25% of their annual highway funding until they do.

Schumer said, "When drivers have their eyes on their cellphones instead of the road, the results can be dangerous and even deadly." Of course, he is right. The only flaw I see in the law proposed by these senators is that it doesn't go far enough.

The law needs to ban ALL cell phone use while driving. The National Highway Traffic Safety Administration (NHTSA) has shown that talking on a cell phone while driving is equally as dangerous as driving witha blood-alcohol content of 0.08 (which is labeled as drunk driving in most states). It is three times more dangerous than that when dialing.

Some people think the hands-free units solve that problem. According to the NHTSA, the danger is not in holding the phone, but in the conversation itself. People get so involved in the conversation that they lose their focus on driving. How can we justify outlawing drunk driving, when we continue to allow this activity which is just as dangerous.

The fact is that all cell phone use (talking, texting, e-mailing, cruising internet, etc.) is too dangerous to allow drivers to do. Why then, does Congress want to only half-do the ban that is needed? Would doing the job right cost them some phone company lobbying dollar?

(Cartoon is by Jeff Stahler in The Columbus Dispatch)
Posted by Ted McLaughlin at 12:04 AM