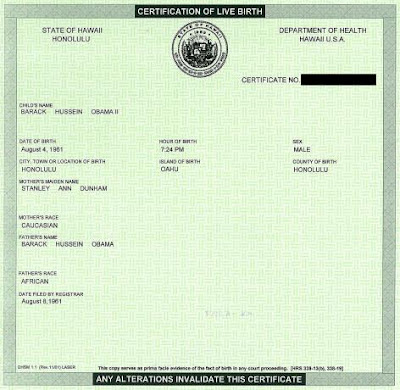 One of the most idiotic claims by the right-wing lunatic fringe is that President Barack Obama was not born in the United States, and is therefore not eligible to be the president. Of course this has been disproved many times. His birth certificate (above) is on the internet (but of course these "birthers" claim that is not the "real" certificate).

But proof means nothing to the "birthers". They have made up their minds and don't want to be confused with facts. The most humorous part of this whole thing is how scared most Republican congressmen are of these nutjobs. One blogger decided to find out just how many Republicans on Capitol Hill are "birthers" by asking them. Only a couple of them have admitted that Obama was born in the United States.

Most have deflected the question by saying something like "We'll see" or refused to answer it at all. One even ran from the questioner, and another hid in a bookstore. I don't blame them. They either show themselves to be complete idiots or piss off their nutty base, if they answer the question.

But they may have to make a decision soon. Hawaii Rep. Neil Abercrombie has introduced a resolution (HR 593) “recognizing and celebrating the 50th Anniversary of the entry of Hawaii into the Union as the 50th State." But the fly in the ointment is a sentence in the resolution that says “Whereas the 44th President of the United States, Barack Obama, was born in Hawaii”.

Most resolutions like this are passed on a unanimous voice vote, but if that happens, then all the Republicans will be on record as having voted that President Obama was born in Hawaii. That won't set well with the base of their party.

Rep. Michelle Bachmann (R-Minnesota), reigning queen of the lunatic fringe, has stopped the resolution for now. She lodged an objection to the unanimous voice vote, and further proceedings were postponed. But the resolution has not gone away.

I expect the legislators from Hawaii are not going to let the matter die, and will bring the matter back up for a vote. But this time it will be a recorded vote. What will the Republicans do? I expect a lot of them will be missing, and they'll try to convince their constituents they had very pressing business elsewhere.

I almost feel sorry for the Republicans who have to answer to the "birthers".
Posted by Ted McLaughlin at 12:04 AM