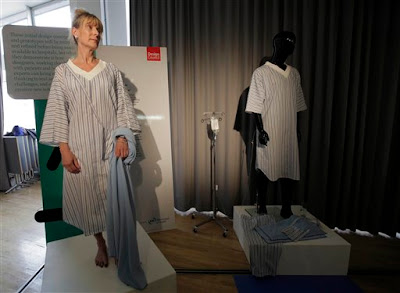 If you've ever been admitted to a hospital, then you know about the glaring inadequacies of a hospital-issued gown. The flimsy gowns open in the back and the only thing to hold them together are some cloth ties (which naturally are useless since you can't reach them to tie them). If you get out of bed wearing one of them, you can bet you'll be flashing anyone in the room.
And the nurses are adamant that you need to exercise by doing some walking. When you do, you wind up with one arm behind your back trying to hold the gown together and the other pushing your IV stand. Of course, if the IV stand hangs up on something and you need both hands to free it you find yourself exposing your rear (and maybe more) to anyone in the area.
I realize that the gowns are necessary because they give doctors and nurses easy access to your body so they can perform tests and check on your progress, but there has to be a better way to make these gowns -- one that will allow easy access and also protect a patient's modesty. Fortunately, the British government thought so too.
They gave several designers grants of $37,500 to design a gown that would both provide access to medical providers and would not compromise patient dignity. Yesterday they unveiled the fruits of those labors. It looks like the designers were successful and the government money well-spent. They hope to have the new gowns in all their hospitals by next year.
Instead of opening in the back, the new gowns (pictured above) open on the side and have snaps to keep it closed (something that can be easily done by the patient). One version even has a small pocket for a cell phone. And they come with a soft fleece blanket. As a former hospital patient, I'm impressed.
The Brits are eager to share the new design with President Obama in the hope it will help "in his efforts to overhaul U.S. health care practices." I don't know if it will help to reform health care, but I believe millions of hospital patients in this country would love to have the re-designed gowns. They are a huge improvement over the current gowns.
The only question now is how long will it take American hospitals to start using the new gowns? I hope it's not long.
Posted by Ted McLaughlin at 12:02 AM