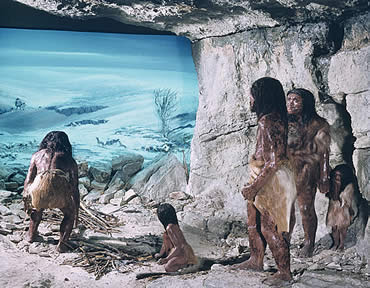 It has long been thought that thousands of years ago, modern humans and neanderthals lived at the same time, and eventually the neanderthals (pictured) died out and left only humans. But that may be too simple an explanation. There is now some evidence that there may have been a third group of hominins (human-like) living as late as 30,000-48,000 years ago, and this previously unknown group may have had interaction with both neanderthals and modern humans.
A finger bone has been discovered in a Siberian cave. What makes this discovery exciting is it's DNA. Scientists were able to recover mitochondrial DNA from the finger, and when they compared it to the DNA of modern humans and neanderthals they found it didn't match either one, although it lived at the time when both humans and neanderthals existed.
Scientists are tentatively calling this third hominin "X-woman". The scientists who studied the DNA say these hominins had the same ancestor as modern humans, but diverged from the human line about 1,000,000 years ago. By comparison, the neanderthals diverged from the human line about 500,000 years ago.
Scientists also discovered an ancient bracelet on the same cave level as the finger bone. It has not yet been proven that they are connected, but if they are it would be proof that "culture" is not an exclusively human (and neanderthal) phenomenon.
In fact, some scientists now believe there may be more hominin lines besides these three, and the evidence has just not yet been found. Pretty exciting stuff!
Posted by Ted McLaughlin at 12:06 AM

Email ThisBlogThis!Share to TwitterShare to FacebookShare to Pinterest
Labels: evolution