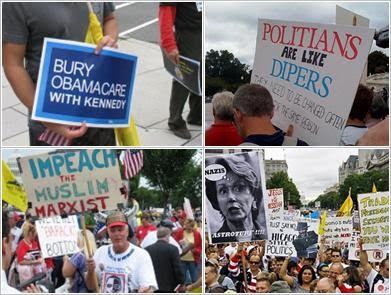 I was trying not to comment on the ridiculous reaction of the teabaggers to the passing of the new health care laws. I thought it was just sour grapes, but I can understand that. There have been political battles that I didn't feel good about losing, and I did my share of complaining. But now certain elements in the teabagger movement (if it can be called a movement) have gone too far.
Consider some of the things that have happened:
-Bricks were thrown through the windows of Democratic congressmen in Arizona and New York.
-Black congressmen were called racial epithets and spit upon.
-A homosexual congressman was called a vile sexual epithet.
-Several Democratic congressmen were threatened with death.
-A Missoura congressman had a casket placed on his front lawn.
-In Virginia, someone tried to cut the gas line to a congressman's house (but had the wrong address and did it to his brother instead).
This goes far beyond political discourse -- even passionate political speech. This behavior has crossed the line into criminal behavior. It's political terrorism, reminiscent of al Queda-style politics. They lost a political battle, so they're trying to win that battle through threats and fear. That cannot be tolerated in a democracy.
I believe in free speech. People in this country have the right to demonstrate and put forth their views. They even have the right to do that in an offensive way. After all, if you've never been offended, then you don't live in a free country. But they don't have the right to behave in a criminal terroristic way, and anyone who does that should be arrested and punished.
Some Republicans have spoken boldly against this criminal behavior, while others seem afraid to make their teabagging base angry (or they agree with them). I have to think that some of them have fed into this unacceptable behavior with their over-the-top rhetoric -- "socialism", "Hitler", "the end of democracy", "government takeover", "death panels", "re-education camps", "return to slavery". None of these things are true, and they are used just to egg-on their followers.
Things have gone too far, and it's time to scale back the rhetoric. If not, there's going to be a tragedy somewhere. There's an element of the teabaggers who already think they can take the law into their own hands. They don't need any further encouragement.
In a democracy, it's just a fact of life that you'll win some battles and lose some others. That's the nature of the beast. But win or lose, we must keep the political discourse within the bounds of the law (and hopefully common decency). We live in a great country. Let's keep it that way.
Posted by Ted McLaughlin at 12:02 AM