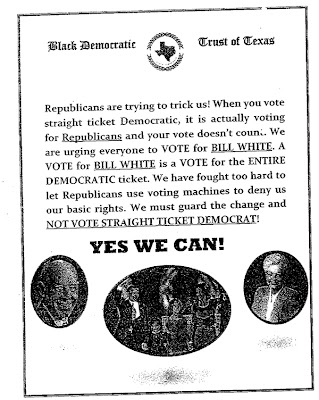 Even though Texas is normally a pretty Republican-dominated state (there are no statewide elected offices held by anyone other than Republicans), it looks like some Republicans in the state are running scared.   It came out last week that Republican teabaggers in Houston were trying to intimidate minority voters.   That charge is already being investigated by the U.S. Department of Justice.

Now the above flyer has been showing up on the windshield of many cars near the Sunnyside early voting location in Houston (where many minority voters cast their ballot).   It purports to be from a minority organization -- the Black Democratic Trust of Texas.   But there is no such organization.

It is an attempt to keep minority voters from voting the straight Democratic ticket by telling them that such a vote would be counted for the Republicans.   It asks them instead to just mark there ballot for Bill White, the Democratic candidate for governor, and that would be the same as a straight-ticket vote and would count for all Democratic candidates.

Obviously,this is an attempt to suppress votes for down-ballot Democrats (many of whom are favored to win in Houston and Harris County).   It is an attempt by local Republicans to win some local races by cheating that they could not win honestly.   Voter suppression seems to be a common Republican tactic in Houston.

Personally, I think it is also racist.   Because it assumes that African-American voters are not smart enough to see through this crude attempt to subvert their votes.   They aren't stupid (which is proven by their lack of support for Republican teabagger candidates), and I doubt that the flyers changed any votes.   But that is beside the point.

The point is the racists tried to suppress the minority vote, and that cannot be allowed to happen in a representative democracy.   Those who printed and distributed the flyers should be prosecuted for trying to tamper with an election.

Dirty tricks has become a tradition for many Republicans.   Perhaps the inimitable Juanita Jean, owner of the World's Most Dangerous Beauty Salon, Inc., put it best when she said,   "Getting Republicans not to try to cheat black folks out of their vote is like trying to eat red beans with a pitchfork.   Republicans have messed with black folks for so long that now they can mess with black folks by pretending to warn against Republicans messing with black folks."
Posted by Ted McLaughlin at 12:04 AM