Mine Disaster Should Not Have Happened 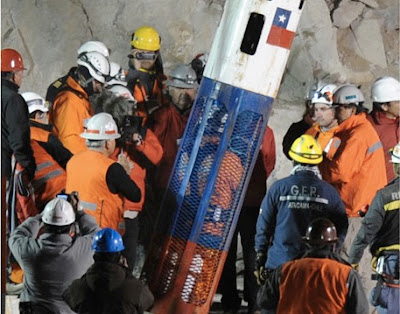 A couple of weeks ago people all over the world held their collective breath as they watched the government of Chile, aided by mining experts and equipment from around the world, pull off an engineering miracle and rescue 33 miners who had been trapped underground for 69 days.   The Chilean government and everyone who helped them deserve all the praise and accolades they have gotten for successfully pulling off the rescue.

But what most people don't know is that the disaster at the mine should never have happened.   Both the copper company and the government of Chile knew the mine did not meet even the most rudimentary safety standards.   But the company opened the mine anyway, and the government allowed them to do it without requiring they first insure it was safe.

Javier Castillo, president of Central Unitaria de Trabajadores (United Workers' Center), claims the Chilean government knew the mine was not safe, but allowed it to open anyway.   He said,   "We had a meeting with Labor Minister Merino, in which we talked about the risks in that mine and the fact that despite the number of accidents, deaths and landslides, keeping jobs was always in consideration, at the price of the workers' lives."   He added  "the danger at that deposit was in fact made known to government authorities before the accident of last August 5."

Union leaders again tried to talk with government officials on July 5, after an accident in that same mine seam which cost a miner his leg.   At that time, government officials refused to see them.   They simply did not want to hear of problems in a mine that was making money for both the company and the government.

But it gets even worse.   The miners had told the company of growing problems within the mine, and on the same day the accident happened, they had asked to be permitted to leave the mine.   The company's operations manager Carlos Pinilla refused, and three hours later the disastrous cave-in happened.

Congressman Carlos Vilches talked with one of the trapped miners -- Juan Illanes.   Vilches said,   "He told me that at 11 they began to hear very loud noises.   They asked to leave and they were denied permission.   They believe there was negligence on the part of the owners and managers.   The conditions and the risk were already known, but these gentlemen (acted) as though it were just some crumbling . . . The reasonable thing would have been to get them out."

Miner Jimmy Sanchez said,   "The mine was making noise and they left us inside."   His fellow miner Omar Reygadas said,   "I was in the loader when it happened.   Afterwards I heard about the call.   It must have been the shift supervisor or the foreman.   One of them got in touch with Pinilla.   He knew very well what was happening in the mine, so he can't deny it.   It had been rumbling for several days."

A friend of miner Jorge Galleguilles said that by the fourth, the day before the cave-in, a truck driver had notified Pinilla of the impending disaster but,   "Nobody listened to him.   And that despite the fact that about a half ton of dirt and rocks had fallen on his truck.   The boxes -- the wall rocks -- were exploding every few minutes."

While the rescue was heroic, the fact that the miners were even in the mine at all is shameful.   The company was warned several times that conditions inside they mine were deterioating, and they refused to pull the miners out (or even let them come out after they pleaded with management).   And the government of Chile must accept its part of the blame.   They allowed the mine to open while knowing it was unsafe, and refused to listen to worker concerns even after accidents started to happen.

The president of Chile and his cohorts looked like heroes when the rescue happened.   They weren't.   They were just trying to cover up for their own incompetence.
Posted by Ted McLaughlin at 12:06 AM