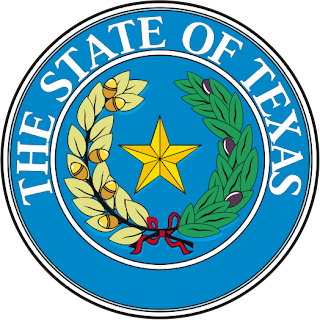 We have known for several months now that there will be a deficit in the next biennium for the state of Texas.   I say biennium because the Texas legislature only meets once every two years, so they do budgets for two years instead of one.   For quite a while now, Texas government has operated with a surplus -- so much so that they have been able to put a little over $8 billion into a "rainy day" fund.   But those good economic times are over and its starting to rain -- really hard.

A few months ago it was believed that Texas would have an $8-$10 billion dollar deficit in the next biennium.   It didn't take long for that estimate to rise to between $12 and $15 billion dollars.   Now the politicians are telling us that the deficit will probably be up above $21.5 billion dollars.

The state's Republican leadership has ordered state agencies  to cut their budgets by 5%-10% several times, and those agencies are currently under a new order to cut their budgets one more time.   One politician has even said the legislature will have to take a "meat cleaver" approach to the budget next year.   Both parties are trying to fool the voters into thinking this huge deficit problem can be solved by simply cutting state services.   Unfortunately, that is a lie.

Most state agencies are already operating on a bare bones budget.   If much more is cut from their budgets they will not be able to deliver the services to the people that they are mandated to give.   And what good is an agency that is incapable of delivering services?   The answer to that is no good at all.

In addition, there are some agencies for which if more is cut serious problems will arise.   Two of these that instantly come to mind are the Texas Youth Commission (TYC) and the Texas Department of Criminal Justice (TDCJ).   There is a point beyond which these agencies cannot cut more and still deliver a level of service that protects both the public and state inmates.   It would be unacceptable to all of us if the agencies can no longer protect the public, and if the inmates can't be protected from abuse then we are looking at court cases that could cost the state far more than proper budgets for the agencies would cost.

As you can see, most (if not all) state agencies provide vital services that the state simply cannot do without.   And only a moron could believe a deficit of over $21.5 billion could be eliminated by cutting the money these agencies get.   Since the state constitution mandates that the state must balance its budget in each biennium, something else must be done.

Like it or not, taxes are going to have to be raised somehow.   And it doesn't matter whether the Republicans or the Democrats win in November, there will be more tax revenue raised.   There is simply no other option.

Even though you won't hear it from the politicians, who are all busy lying to you right before this coming election, so new tax revenues and income sources are already being considered.   Texas already has one of the highest sales taxes in the nation (Texas loves regressive taxes that hit the poor harder than the rich), but there are many things that have been exempted from that sales tax.   That is probably going to end for many of those things.

State leaders will probably not raise the sales tax rate, but they will almost certainly increase the number of things that will be covered by the tax.   They'll do it that way so they can say they didn't raise the tax (even though paying a tax on new things is definitely a rise in taxation).

There is also talk of allowing casino gambling which could be heavily taxed, and a new state property tax which would be dedicated to education.   About the only new tax that won't be considered is a state income tax (because that would affect the rich, and we can't have that).

So don't let the politicians of either party fool you.   There are going to be more taxes.   It's just a question of what kind and how much.
Posted by Ted McLaughlin at 12:04 AM