Criticism Of The Right Is Well-Deserved 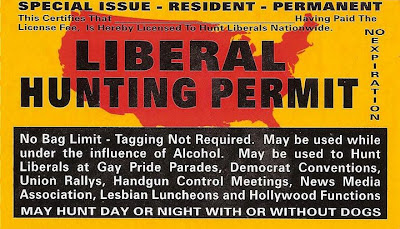 Since the shooting of nearly twenty innocent people (six of whom were killed) in Arizona, there has been a debate on hate speech and whether it had anything to do with that shooting.   The right has been dancing as fast as they can in a effort to deny any culpability.   But regardless of whether Loughner (the Arizona shooter) was influenced by the violent rhetoric from the right or not, there is little doubt there has been a lot of that rhetoric and it has created an atmosphere where nuts can think they might have approval for violent actions.   Here is just a sample of some of the right-wing hate speech:

RUSH LIMBAUGH -
"You know why there's a Second Amendment?   In case the government fails to follow the first one."
"I tell people don't kill all the liberals.   Leave enough so we can have two on every campus - living fossils - so we will never forget what these people stood for."

GLENN BECK -
"I'm thinking about killing Michael Moore, and I'm wondering if I could kill him myself, or if I would need to hire somebody to do it. . . .No, I think I could.   I think he could be looking me in the eye, you know, and I could just be choking the life out.   Is this wrong?"
"Every night I get down on my knees and pray that Dennis Kucinich will burst into flames."

ANN COULTER -
"My only regret with Timothy McVeigh is he did not go to the New York Times Building."
". . .liberals are always against America.   They are either traitors or idiots, and on the matter of America's self-preservation, the difference is irrevelant."
"We need to execute people like John Walker in order to physically intimidate liberals, by making them realize that they can be killed, too."
"I think a baseball bat is the most effective way (to talk to liberals) these days."

MICHAEL REAGAN -
"Howard Dean should be arrested and hung for treason or put in a hole until the end of the Iraq War."

REP. PETER KING -
"And I think people like Tim Russert and the others . . .they're the ones to be shot."

BILL O'REILLY -
"They ought to hang this Soros guy."

This is just a small sample of the violent rhetoric from right-wing leaders.   They would have us believe that no one is affected by this kind of speech -- that it is just harmless political speech.   I wish that was true, but the fact is that there are far too many instances of violence for political reasons in this country -- and it happens because of the climate that is created by this kind of hate speech.   Here is just a few of the incidents that have happened (by right-wingers who thought they were justified because of their political views):


Even those right-wingers who know some of their leaders have stepped over the line try to justify it by saying there is violent rhetoric on both sides of the political spectrum.   They would have us think that this kind of rhetoric happens equally on the left and right.   Not true!   It is much more common on the right (and usually considered to be very funny -- like the picture above).   The left may be passionate in its beliefs, but they are not calling for the assassination of anyone on the right, and there are no left-wingers carrying out acts of violence.

There is no excuse for this kind of hate talk or hate violence.   Americans may disagree, but that does not make them enemies, and it should not make them targets.
Posted by Ted McLaughlin at 12:06 AM