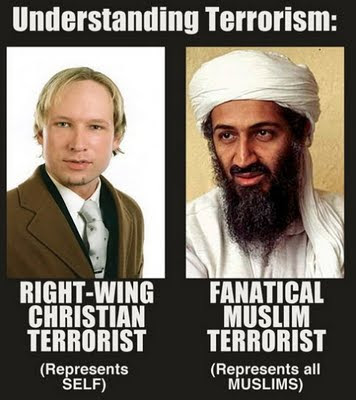 Terrorists are all vicious criminals regardless of their religion (or lack of it) and no one is born to be a terrorist. It is a behavior that is learned from experiences and from listening to others (and those others may not even realize they are helping to create a terrorist). When we demonize those who we disagree with and talk as though they are less than human, then we may well be creating a future terrorist. The Norwegian terrorist was not a lone nut. He learned his beliefs and justified his behavior by reading and listening to others -- just as all terrorists do.
Posted by Ted McLaughlin at 12:05 AM