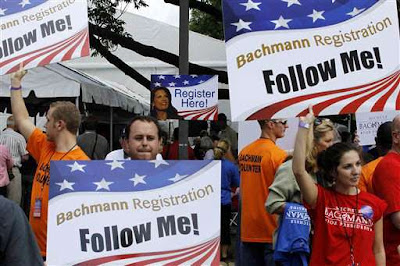 Iowa Republicans held their big straw poll on Saturday and they had a respectable turnout -- some 16,982 people cast ballots according to the Des Moines Register. There are varying opinions on the importance of the straw poll. Some say it is meaningless, and others view it as a good predictor of how Iowa will go when their real caucuses are held. If nothing else, it is a snapshot of what Iowa Republicans are thinking right now.

The big winners of the straw poll this year are Michele Bachmann and Ron Paul. This is no big surprise since both were believed to have strong support in the state. Bachmann was born in Iowa and lives in a neighboring state, while Paul has built a fairly strong organization in the state. Here are the results:

That adds up to 16,774 votes out of the 16,892 votes cast. After you subtract the 3 votes cast for the Iowa State Fair Butter Cow (a sculpture made from butter), that still leaves 115 votes unaccounted for. It is probably safe to assume that all or most of those went to Sarah Palin, Gary Johnson, and Buddy Roemer -- all of whom were not on the official ballot.

Although she would never admit it, I think that has to embarrass Sarah Palin. She has not declared herself as a candidate and was not on the ballot, but she did have a movie premier in Iowa a couple of weeks ago and visited the state last Friday. I think she was holding out for a "draft Palin" vote in the straw poll -- something that obviously did not happen. This might finally convince her to stay out of the race.

Pawlenty is trying to put a good spin on his third place finish, but it was a pretty weak third place finish -- with him getting less than half the number of votes of either of the top two finishers. If that's the best he can do in a state that borders his home state of Minnesota, where is he going to do any better?

Santorum has to be disappointed also. He put in more time in Iowa than any other candidate, and still couldn't even get a double-digit percentage of the votes. He might as well fold up his campaign tent and go home -- and the same could be said about Gingrich, Huntsman, McCotter, Roemer, and Johnson. Cain said he was hoping for a top-three finish, but his fifth place finish is probably as good as he's going to do anywhere.

That leaves Mitt Romney and Rick Perry. Romney made a point of not trying to win the straw poll, although he has visited the state several times. I think he just knew he couldn't beat Bachmann in Iowa. But even saying he didn't really try in Iowa can't explain how poorly he really did there. Getting only 567 votes (3.36%) has to be viewed as a crushing defeat for Romney.

Rick Perry was not on the ballot, but he has had some people in the state for a couple of weeks trying to organize a write-in campaign for him. He may have lost some votes by announcing his candidacy in another state on the same day of the straw poll -- thus stealing some of the poll's thunder. Was that a blunder? Only time will tell. But getting 718 write-in votes (far more than any other non-ballot person) keeps his campaign at least credible.
Posted by Ted McLaughlin at 12:06 AM