Bernie Sanders Asks For Your Help To Save Social Security 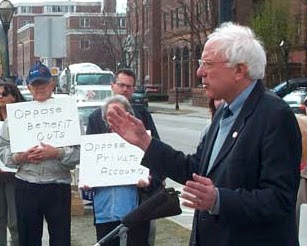 Senator Bernie Sanders is still doing his best to save Social Security as we know it. Now he is asking for your help. He wants you to sign on as a citizen co-sponsor of the Keeping Our Social Security Promises Act. Here is what he has to say:

Senator Bernie Sanders
Posted by Ted McLaughlin at 12:02 AM