It's Just A (GOP) Beauty Contest 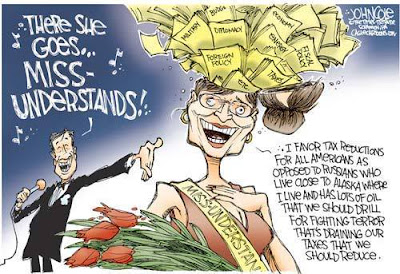 "It doesn't much matter which one of the Republicans gets nominated because they're all the same. They are all embracing and bear-hugging the Tea Party. Moving to the right - they can't move to the right far enough.
They all favor privatizing Social Security, which would pull the safety net out from under our seniors, and favor ending Medicare as we know it... They all are wrong on immigration reform when it comes to Hispanics in the states."
Those are the words of Rep. Debbie Wasserman Schultz of Florida -- the chair of the Democratic National Committee. And she's absolutely right. And she could have gone on and on -- they're all against equal rights for gays/lesbians, opposed to the EPA, opposed to federal education standards, opposed to regulations on businesses and financial institutions, opposed to limiting carbon emissions, in favor of lower (or no) taxes for the rich and corporations, against funding real job creation, opposed to extending unemployment benefits, against first amendment separation of church and state, in favor of outsourcing American jobs, against the minimum wage, opposed to unions, against medical insurance coverage for all Americans, in favor of continuing the endless wars, opposed to cutting the military budget, and generally opposed to any federal program that helps the poor and disadvantaged.

With the possible exception of Jon Huntsman (and he has as much of a chance at winning the nomination as I do of becoming the Queen of England), they all agree on the issues. They have all, including Mitt Romney, moved so far to the right to please the teabaggers that now control the Republican Party that their views are now indistinguishable. And this has made their numerous "debates" little more than a farce. They could save a lot of debate time by letting only one of them answer a question, and then entering "me too" as the response for all of the others.

That means the "debates" are little more than a beauty contest. Maybe it would be better to change the format of these gatherings to something resembling a real beauty pageant like Miss America. They could have them all walk the runway in formal wear, then have a talent segment (if any of them have an actual talent), then have them walk the runway in swim wear, and finally ask them an inane question like "What's your favorite tree?". This would probably enlighten the GOP voters more than the current format -- since it is now down to a beauty and personality contest.

And considering this, maybe Sarah Palin should get into the race for the nomination. After all, she has some experience in this kind of contest. Wasn't she runner-up in the Miss Alaska contest back in the Dark Ages?
Posted by Ted McLaughlin at 12:04 AM