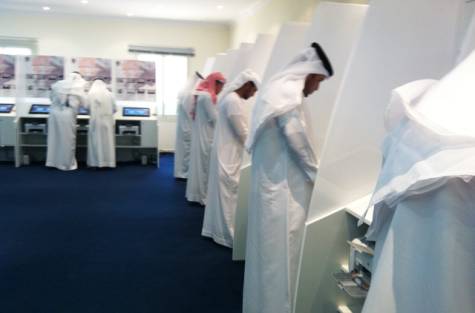 The United Arab Emirates just held their second election ever. It wasn't for the leadership of the country, because the seven Emirates are each ruled by an absolute monarch -- one of which is chosen to be "president" and represent them internationally. No, the election was to pick 20 members of the 40-seat Federal National Council -- a group that "advises" the UAE's government.

When the first election was held in 2006 only slightly more that 6,000 people were allowed to vote. But in this election a whopping 129,000 people were allowed to vote. Not many, considering that the country has an estimated population of around 8 million (and over 400,000 of those are officially Emiratis). Why so few voters? Because voters must be approved by the government (the absolute monarchs), and nobody really knows what the criteria are for becoming an approved voter.

Have you ever heard of a worse example of a sham election? Why even bother holding an election if the electees have no real power, and both the voters and the candidates must be approved by the government? And it looks like even the chosen voters know this, because only about 36,000 of them even bothered to go to the polls.

I'll bet the UAE "election" made the American Republican Party jealous though. After their efforts across this country to restrict the people who can vote in United States elections, this seems like the perfect model for what they are trying to create. They would love to fix it so only right-wingers have the right to vote.
Posted by Ted McLaughlin at 12:04 AM