Occupy Wall Street Is Having A Positive Effect 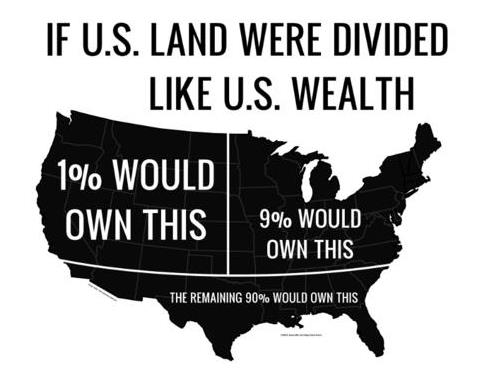 The image above brings home a very disturbing fact about the United Staes -- the vast inequality of wealth and income in the country. This inequality, which grows worse with each passing week since Congress has done nothing about it, was the primary cause of this Great Recession (just like a previous and very similar gap caused the Great Depression).

But there is a big difference between the previous gap causing the Great Depression, and the current gap causing the Great Recession. The previous gap was caused by the Republican Party favoring the rich and the coporations. But when the Democrats got into power they changed the economic policies, put people back to work (using WPA and CCC), created the Social Security system, and gave the country new hope.

But things were different this time. After the Republicans went back to their old ways of favoring the rich and the corporations, causing the current economic mess and the loss of millions of jobs, the people again put the Democrats back in power in 2008. But this time nothing happened. It turns out that the rich and corporations had gotten smarter -- instead of just buying the Republican politicians, they also bought a passel of Democratic politicians (the blue dogs). And the Republicans combined with the blue dogs were powerful enough to prevent any economic changes or job creation.

After watching the Congress muddle around for nearly three years without changing the failed "trickle-down" Republican policy or doing anything to create a substantial amount of jobs, it became obvious that too many members of Congress (of both parties) were controlled by the corporations and the rich and nothing was going to be done to help ordinary and hurting Americans. In fact, the situation was being made worse by cuts to education and social programs while the rich continued to get unnecessary tax cuts and the corporations received unnecessary subsidies.

If any needed change was going to occur, it would have to start with the American people -- not the corporate-owned politicians in Congress. When this became obvious, it resulted in the birth of the Occupy Wall Street movement. It may have started small with only a few hundred protesters in New York City, but it struck a chord with the American people and spread quickly to many other American cities -- first the large cities, and then in the smaller cities, and finally in cities around the world. It has now grown so large that it can no longer be ignored.

But can the movement cause real economic change in the United States? Probably not until and unless it grows even larger, but it has caused a couple of minor changes already -- and one of those could lead to much bigger changes down the road.

The first change is that it is starting to scare the big banks on Wall Street. At about the same time that the Occupy Wall Street movement started, one of the biggest banks (Bank of America) announced they would start charging their depositors a $5 a month fee for using their debt cards (accessing their own money). Several other of the giant Wall Street banks indicated they would do the same. But the American public, led by the Occupy Wall Street protesters, gave voice to their anger over this latest insult from the greed-mongers of Wall Street (whose illegal actions triggered the recession).

Many people threatened to pull their money out of the giant banks and put it into local banks and credit unions. There was even a day set aside, November 5th, to do this en masse. Now the big banks are backing down. J.P. MorganChase, U.S. Bancorp, Citigroup, PNC Financial, KeyCorp, and other banks are now saying they will NOT follow Bank of America's lead in charging for use of a debit card. And frankly, it would not surprise me if Bank of America didn't reverse their decision soon also.

But the Occupy Wall Street movement has caused an even more important change -- one that could lead to needed economic changes down the road. They have altered the national dialogue, especially on the nation's news media outlets. Last summer all the media wanted to talk about was the national debt, an issue that is far less important than job creation and income inequality. A review of the 24-hour news sources (MSNBC, CNN, Fox) in the last week of July showed the following mentions:

But after a month of the Occupy Wall Street movement that has changed. A review of the same news sources during the week of October 10-16 showed the most popular word references had changed to:

This is good change. A problem cannot be solved until the public is discussing it as an important issue, and that is unlikely to happen until the issue is being covered by the media. The movement still needs to grow to be the catalyst for a real change in economic policy, and that can happen now because the nation is now paying attention and starting to discuss the real issues.
Posted by Ted McLaughlin at 12:06 AM