Is Paul Really Worse Than The Others ? 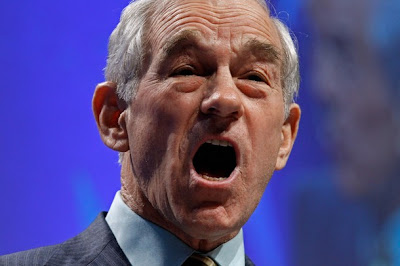 Texas' nutty Representative Ron Paul did pretty well in the Iowa caucuses. Although he officially finished in third place, he was very close to Romney and Santorum -- and could easily get an amount of delegates out of that state equal to them. With that good Iowa finish and enough money to stay in the race for quite a while, some of his supporters are now thinking he actually has a chance to be the Republican nominee.

In the hope of short-circuiting that scary idea, Summer Ludwig at the excellent blog Addicting Info has compiled a list of 10 reasons to NOT vote for Ron Paul. They're some pretty good reasons, so I list them here:

1. Ron Paul does not value equal rights for minorities.
2. Ron Paul would deny women control of their bodies and reproductive rights.
3. Ron Paul would be disastrous for the working class.
4. Ron Paul’s tax plan is unfair to lower earners and would greatly benefit those with the highest incomes.
5. Ron Paul’s policies would cause irreparable damage to our already strained environment.
6. A Ron Paul administration would continue to proliferate the negative image of the US among other nations.
7. Ron Paul discriminates on the basis of sexual orientation and would not provide equal rights and protections to glbt citizens.
8. Ron Paul has an unnatural obsession with guns.
9. Ron Paul would butcher our already sad educational system.
10. Ron Paul is opposed to the separation of church and state.


But after studying the list for a while, I had to admit to myself that this list would be a good one for ANY of the Republican candidates this year. I initially had some doubts about a couple of the reasons -- numbers 6 and 8. There is no doubt that foreign policy under Ron Paul would be radically different than under the other Republican candidates, since he is an isolationist (and that is a ludicrous idea in this modern world). But all of the others would re-institute the Bush foreign policy, which was an abject failure and had even our friends angry with us. Truly, the foreign policy of any of the Republican candidates would create a negative image for the United States on the world stage.

Number 8 regards Paul's "unnatural obsession with guns". I honestly don't know how many of the Republican candidates own or love guns. But I do know that all of them toe the line when it comes to the National Rifle Association (NRA). There's not a single Republican candidate who wouldn't bow to the wishes of the NRA, who is obsessed with arming this country to the teeth and removing all gun regulations.