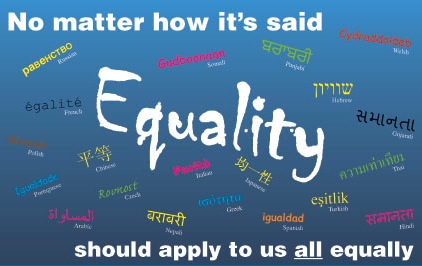 (The above graphic was found at the website Little Candles: Education and Touch.)

Equality under the law is something that is guaranteed by the United States Constitution. But it is also something that has never fully been realized in this country. Even though decent Americans have been trying to achieve the dream of equality for many decades now, there is still a segment of the population that feels they are superior to other groups in the country.

These bigots commonly use religion as a shield to hide their bigotry and maintain their superiority over their fellow citizens. They claim their "religious freedom" allows them to deny equal rights to others. They used this ludicrous argument to defend slavery and racial separation, and they used it to deny women (and minorities) the right to vote. Now they use the same weak argument to deny basic equal rights to gays and lesbians.

But bit by little bit, this country still marches forward toward true equality -- in spite of the racists and bigots. Soon, another state will join the growing list of places that allow gays and lesbians the right to marry the person they love, and to enjoy the privileges and legal ramifications that marriage offers. Currently eight places guarantee this right to homosexuals -- New York, Iowa, Washington, New Hampshire, Massachusetts, Connecticut, Vermont, and the District of Columbia. Maryland will soon be the ninth.

A couple of days ago the Maryland Senate passed a bill giving gays and lesbians the right to marry. The bill, which has already been approved in the House of Delegates, now goes to Governor Martin O'Malley. O'Malley has already said he would sign it into law. The law is set to take effect next January.

I harbor that same hope for the state of Maine -- that on election day the decent people will be able to out-vote the religious bigots. In Maine, those hoping to legalize marriage rights for homosexuals have gotten the required number of signatures to get a referendum on the November ballot.

State lawmakers could just go ahead and approve same-sex marriage in the state, but it is far more likely they will just put it on theNovember ballot and let the people decide. This same kind of referendum was on the ballot in 2009 and lost by 53% to 47%. Hopefully, it will pass this time, and Maine will become the tenth place in America to legalize equality.
Posted by Ted McLaughlin at 12:06 AM