Corporations Are Not Overtaxed 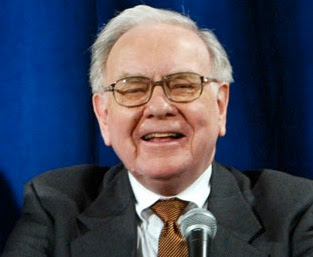 The Republicans in Congress would like for Americans to believe that corporations in this country are having trouble competing on the world stage because they are overtaxed. They want to cut corporate taxes (and some even want to eliminate corporate taxes altogether). The problem with their argument is that it simply isn't true. It's just another Republican lie told so they can satisfy the greed of their corporate buddies.

Warren Buffett (pictured above), one of the richest and most successful men in the United States, has a different point of view. Here is what he has to say:

The interesting thing about the corporate rate is that corporate profits, as a percentage of GDP last year were the highest or just about the highest in the last 50 years. They were ten and a fraction percent of GDP. That’s higher than we’ve seen in 50 years. The corporate taxes as a percentage of GDP were 1.2 percent, $180 billion. That’s just about the lowest we’ve seen. So our corporate tax rate last year, effectively, in terms of taxes paid for the United States, was around 12 percent, which is well below those existing in most of the industrialized countries around the world. So it is a myth that American corporations are paying 35 percent or anything like it…Corporate taxes are not strangling American competitiveness.
Posted by Ted McLaughlin at 12:00 AM