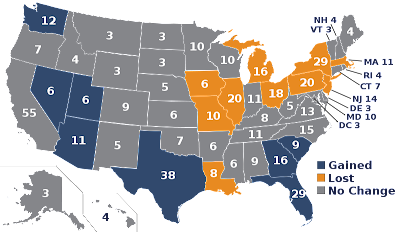 Back in November, msnbc.com had the battle for electoral votes nearly evenly split -- with 196 for Democrats and 195 for the Republicans. But that was when the political pundits thought Romney was the "inevitable" nominee for the Republican Party and before he was hurt by the knowledge of his tiny tax rate (less than the middle class pays), his hiding of money in the Cayman Islands to avoid taxes, and his job-destroying efforts at Bain Capital. It was also before the ongoing war of words and ads between the Republican hopefuls -- and the disastrous Republican opposition to the payroll tax cut last December.

All of those things, combined with a slight improvement in the economy, has acted to move more states into the Democratic column. The news site now has the Democrats leading 227 to 197. That would leave the Democrats just 43 votes short of victory in the presidential race (while the Republicans would need 73 more electoral votes). Of course anything could still happen between now and November, but the Democrats have to feel good about the way public opinion is moving -- especially since the Republicans seem intent on committing political suicide by forwarding ridiculous policies like their current "war on women".

After perusing the states msnbc.com puts into each category, I don't have much argument with them (although I think some of the toss-ups may be slightly leaning toward the Democrats right now). You may disagree. Here is how they see things right now: