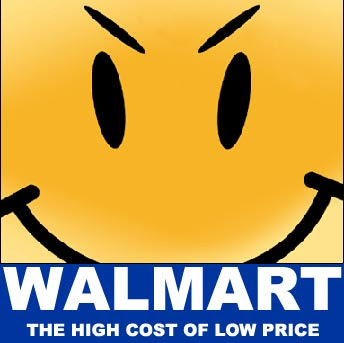 A lot of Americans, especially teabaggers and other Republicans, think the problem of poverty in America would be solved if the poor would just go to work (at whatever job is available). The problem with that delusion is that many, if not most, of the poor are already working -- and many are working full-time. But working full-time at a minimum wage job will not pull a family out of poverty. In fact, it may force them to appeal to the government for help, since their full-time employer doesn't provide enough pay or benefits to provide for the needs of a family (or even an individual).

Too many businesses these days refuse to provide their employees with livable compensation. You may think this is just some small businesses struggling to survive, but that is not true. A prime example of this is the giant corporation know as Wal-Mart. Over at the blog Under The Mountain Bunker, there are some very interesting figures. It seems that this huge corporation is dumping nearly $1.6 billion of what they should be providing (through decent pay and benefits) on to the American taxpayers. Consider the following: