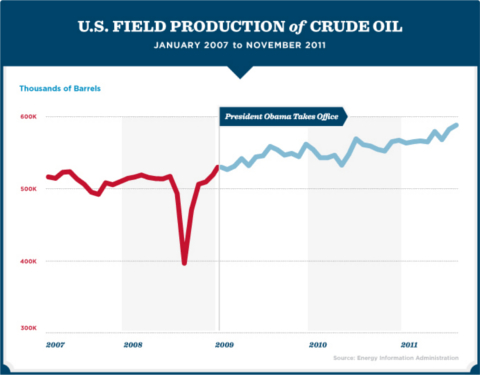 The Republicans picked lame-duck Senator Kay Bailey Hutchison of Texas to provide the response to the president's weekly address. I guess they thought picking someone from an oil-rich state like Texas would lend some credence to their attacks on President Obama's energy policies. They were wrong. A lie is still a lie -- even when it comes from the lips of an oil-state senator.

And all Senator Hutchison did was to tell the same old lies the Republicans have been telling us for a while now. They want us to believe that the current high prices for gasoline are President Obama's fault. Here is some of what Hutchison had to say:

Last February, the average cost of a gallon of unleaded was $3.17 per gallon – the highest February price ever. But this February’s average is $3.57 per gallon – and all forecasts are for prices to rocket above $4.00 per gallon during the summer driving season. Families and businesses will be devastated. . .

We can’t slow down global demand for oil and gas, but we can do a lot more here at home to assure that we have the energy we need and to halt skyrocketing costs.

But, President Obama’s policy has resulted in an unprecedented slowdown in new exploration and production of oil and gas.

Not only will the slowdown in domestic production drive up fuel prices, it also takes away jobs from tens of thousands of oil industry workers.

The same is true for the Keystone pipeline. It would produce thousands of good-paying construction jobs and tens of thousands more at U.S. refineries and suppliers.


The same is true for the Keystone pipeline. It would produce thousands of good-paying construction jobs and tens of thousands more at U.S. refineries and suppliers.

There are so many lies there that it's hard to know where to start. First, nothing President Obama has done has affected the price of gasoline at the pump. That price has risen because of the unbridled greed of both the oil speculators and the Big Oil companies. The speculators have driven up the cost of crude oil and the Big Oil companies have cut back on gasoline production to create an artificial shortage to raise gas prices. And both have done this in spite of already having record profits. Their greed has no limit (and has nothing to do with President Obama).

Second, there has been no cut in domestic production of either oil or natural gas. As my fellow Texas blogger over at Brains and Eggs points out, there is actually an enormous glut in the production of natural gas. So much is currently being produced that it is actually driving down the price that producers can get for it. As for oil production, as the chart above shows, it has been higher in every month under President Obama than any month under George W. Bush.

It is an outrageous lie to say production has been cut. And since there has been no cut or slowdown in the domestic production of oil, that cannot be the reason for the rise in the price of gasoline. There has been a loss of jobs for refinery workers, but this is not due to any drop in production of oil (since there hasn't been a drop). It is due to the Big Oil companies closing refineries to reduce the amount of gasoline available -- so they can claim a shortage and raise prices.

Hutchison has also inflated drastically the job-creation that would occur from building the Keystone XL pipeline. There would be a couple of thousand construction jobs temporarily created to build it, but realistic estimates show the new pipeline would only create a couple of hundred permanent jobs. The Republicans are trying to hide another giveaway to Big Oil as job creation -- another lie.

As for the threat of the oil going to China, it has always been destined to go there. It is only a question of whether China gets gets the crude oil (if the pipeline is not built) or whether they get the refined product (if it is built). None of it will stay in the U.S. in either case (but the Big Oil companies want the pipeline so they can make money by refining the oil for China). Touting the pipeline as a way to reduce the price of gasoline in this country is just another Republican lie.

Why are the Republicans repeatedly telling these obvious lies? Two reasons. First they want to hurt the president, and they think blaming him for gas prices will do that. Second, telling the truth would expose them as being in the pocket of the Big Oil corporations -- which they are.

Here are a few other facts about how the president "is moving us toward energy independence and saving American consumers at the pump":