Is A Romney/Paul Ticket A Possibility ? 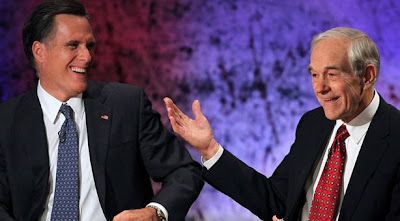 There's a feeling among many political pundits that Ron Paul is not a real player for the Republican presidential nomination. He's considered to be kind of a joke -- a candidate outside the mainstream of political thought (for any political party) who keeps running for president but has no chance of ever even coming close to actually becoming president -- or ever getting the Republican nomination.

And at least part of that is true. I don't think Paul could ever win the Republican presidential nomination. But that's not the only path to the White House. There have been multiple times in our history where a vice-president assumed the office -- and many times those vice-presidents were men who probably could not have won their party's nominations before becoming president. Do any of us really believe that Harry Truman, Lyndon Johnson, or Gerald Ford could have been nominated to be their party's presidential candidate without first assuming the office due to being vice-president?

Now some of you may be thinking right now that there's no way Willard Mitt Romney (aka Wall Street Willie) would pick Ron Paul to be his running mate. A few weeks ago, I would have agreed with you. But now I'm beginning to think that as crazy as a Romney/Paul ticket sounds, it may be a real possibility. Before you dismiss this, examine the following facts:

* Wall Street Willie is not doing so great with his presidential campaign. There is a real possibility that he could arrive at the Republican National Convention with the most delegates, but not a majority of delegates. That would mean he'd need to make some kind of deal to get enough delegates to put him over the top.

* Ron Paul doesn't have a chance of winning a majority of delegates, but there's a really good chance that he'll win between 10% and 15% of the available delegates. What would Paul want in exchange for those delegates. I think it would be more than just an opportunity to speak at the convention. Offering his delegates for the vice-presidential slot on the ticket is something I can see him doing (and his delegates might be just enough to give Romney the nomination).

* The New York Times has recently reported that Romney has "worked to cultivate" a friendship with Ron Paul. The two frequently talk on the phone, and Romney offered to loan his private jet to take Paul back to Texas (after Paul's campaign jet had broken down). He also offered to let the Paul family stay at his Lake home. Is Romney trying to lay the groundwork for a future deal with Paul?

* In the many Republican debates, Paul has made it a trademark of his to attack his fellow candidates -- all except Romney. Think Progress went back and looked at all the debates. They found that Paul had attacked other Republican candidates 39 times -- Santorum 22 times, Gingrich 8 times, Perry 4 times, Cain 4 times, and Bachmann 1 time. But he never made an explicit attack on Romney. Why is this (since he obviously disagrees with Romney on nearly everything)? Is Paul trying to preserve the possibility of a deal with Romney?

* Rick Santorum has recently accused Romney and Paul of working together. He says "their commercials look a lot alike, and so do their attacks". Could he be right? Are they working together?

* Ron Paul appeals to many Libertarians. Romney knows he'll need every vote he can get to have a chance of beating the president. He may think he can woo a lot of voters away from the Libertarian Party by choosing Paul as his running mate.

Personally, this is a scary thought -- that Ron Paul could be a heartbeat away from becoming president. But it wouldn't be the first time the Republicans ran a totally unqualified candidate for vice-president. All we have to do is look back to 2008, when McCain chose Sarah Palin to be his running mate. Romney might well do something similar, and choose Ron Paul to get enough delegates to win the nomination. I think there's enough evidence to consider it a real possibility.

The only saving grace in all of this is that I don't think Romney (or any of his opponents) can beat President Obama in November -- regardless of who they choose to be their running mate.
Posted by Ted McLaughlin at 12:04 AM