Only A Partial Solution 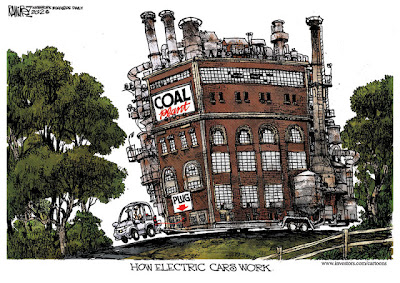 (Cartoon above is done by Michael Ramirez in the Investor's Business Daily.)

Don't get me wrong. I'm not opposed to electric cars. I think they're probably a good idea whose time has come. If we put enough of them on the road, we probably can reduce our dependence somewhat on crude oil. But we need to stop thinking that electric cars are the way to end pollution in the United States.

How can that be? Two reasons. First, gasoline-powered autos are much cleaner than they used to be (and at least the newer ones don't pollute nearly as much as autos used to do). Second, the electric cars must get their electric power from somewhere, and that is usually from a dirty coal-powered energy plant.

If a proliferation of electric cars simply results in the building of more dirty coal-powered energy plants (and there is no such thing as a "clean" coal-powered plant), then little or nothing would have been accomplished toward cleaning up air pollution. The EPA has already told us that nearly 70% of the pollution produced in this country now comes from energy plants -- and the worst violators are the coal-fired plants.

Electric cars are a start, but they are only a small part of the solution we need to combat pollution. Far more important is cleaning up energy-producing plants -- and that must be done by finding new clean and renewable sources for energy production. Coal producers like to brag that they have hundreds of years of supply and their product is cheap. That might be true. But isn't planetary survival more important than a cheap dirty fuel? Can we really afford to continue building coal-powered plants? I think not.
Posted by Ted McLaughlin at 12:02 AM