This Young Man Has My Respect 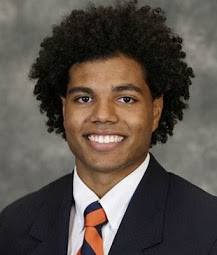 The gentleman in the picture above is Joseph Williams. He is a junior at the University of Virginia. He is also a scholarship football player for that school. He plays cornerback and will play his senior season this coming Fall. Now, this time of year most college football players are eating well, doing some physical training, and preparing themselves for spring football practice. Williams is not doing that.

Williams has joined several other University of Virginia students in a hunger strike. These young people are striking to get their university to pay it's employees (especially service employees like cafeteria workers and groundskeepers) a livable decent wage -- a wage that would allow them to pay their rent and provide the necessities for their families. All of these young people are putting their health on the line for their fellow human beings -- and I can do nothing but respect that.

Williams says he has generally been supported by his teammates and coaches, but a few have wondered why he would risk his health (and therefore his football future) in this way. Here is what he has to say about it:

I am a third year studying Political and Social Thought, and a student-athlete at the University of Virginia.  Last Friday, 12 University students began a hunger strike to protest the economic and social injustices perpetrated by the UVa administration against the vast majority of the University’s service-sector employees. I joined two days later; since then, 5 more students have joined the hunger strike, which is now closing in on in its 7th day.


Although the University of Virginia - Thomas Jefferson’s brainchild and the only US university designated as a UNESCO World Heritage Site - has the prestige and high moral traditions of other top institutions, levels of inequality exist here today that are reminiscent of Jefferson’s days as a slave-master and plantation owner - with one anonymous employee even referring to the University’s Grounds as “the plantation”.

Our University seeks to distinguish itself as a caring community and prides itself on traditions of honor and student self-governance. However, in our “caring community,” hundreds of contract employees may make as little as $7.25/hour while six out of the top ten highest paid state employees in Virginia hold administrative positions at the University. Many employees, mostly women and African Americans, do not receive enough pay for their basic necessities to exist in Charlottesville, where the cost of living is nearly 10% higher than the national average.


This extreme inequality has disturbed and disillusioned students for decades, many of whom have tried to grapple with issues of race, class, and poverty in and out of the classroom. We have taken every conventional route towards this goal, garnered wide student, faculty and community support - yet our pleas have been consistently ignored and workers are still paid unjust wages.

On a personal level, this cause is one that hits very close to home. As one of four children supported by a single mother, I have experienced many periods of economic hardship in my life. Growing up, I moved over 30 times – including various stays in homeless shelters, the homes of family friends, and church basements. As a result of these experiences, I know firsthand what the economic struggle is like for many of these underpaid workers.


One UVa employee anonymously shared that though she works full time for the University, over 40 hours a week, her family was still forced to go without electricity for nearly 3 months, unable to pay for the rent, electric bill and other basic necessities on the meager wages she is paid by the University. Such stories are the reason that I  and countless other Living Wage supporters have chosen to take up this cause and give a voice to the many University employees who often cannot speak up for fear of retaliation from the administration.

We members of the Living Wage Campaign are sometimes met by opponents who have lauded the virtue of the Free Market Economy and praised it as the founding economic institution of our nation. Furthermore, they are "dismayed" at the thought of paying University employees "more than they are worth on the free market." Despite our countless attempts at negotiating with the administration, we have been encouraged by detractors of our cause to “follow the rules” and “work within the political system”. This type of rhetoric, that of “following rules” and the "virtue of the Free Market Economy", only serves to strengthen the resolve of myself and my fellow Living Wage campaigners.


Though we are currently abstaining from food, this discriminatory language provides the sustenance from which we derive our strength. I know I speak for all members of the Living Wage Campaign and, hopefully, for all decent human beings in saying that I will forever refuse to "follow the rules" of any institution which places a monetary value on human life. I refuse to comply with rules, regulations, or restrictions that reinforce the discrimination, persecution, and exploitation of human beings.

In failing to implement a living wage for its lowest paid employees, the University of Virginia has also failed to uphold the moral standards to which it holds its students. We are engaging in this hunger strike to call attention to the administration’s moral hypocrisy and to finally produce results in the form of a Living Wage. Although I am exhausted, hungry, dry-mouthed, and emotionally taxed, I believe it is my responsibility as a member of the University community, and even more as a member of the human race, to stand up and speak for those whose voices have been silenced and whose livelihoods are marginalized by the policies of the current University administration.


Thus, it disheartens me and my fellow campaigners that while these workers are being systematically discriminated against and exploited, there are plans to spend millions of dollars on superfluous additions such as a domed practice field for the football team, hundreds and thousands of flowers around Grounds, and countless other trivialities.


In short, we, as hunger strikers of the Living Wage Campaign, students of the University of Virginia, members of the Charlottesville community, and fierce believers in the human race, refuse to lie down any longer and watch the exploitation and marginalization of University employees and, more importantly, our fellow members of the human race. So until this cause is heard and the University administration pays the wages that its employees have long deserved - we will be striking.
Posted by Ted McLaughlin at 12:02 AM