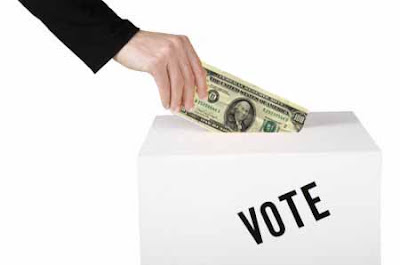 We have known for a while now that a candidate can't run for president in this country unless they are rich or have lots of rich friends willing to spend freely for them. That has never been more apparent than in the current race for the Republican presidential nomination. Willard Mitt Romney (aka Wall Street Willie) has virtually assured himself of the nomination (although it will still take a few more weeks to amass the required number of delegates), but it has taken a ton of money for him to do so.

And an argument can be made that he bought the nomination, because he had at his disposal a lot more money than was available to any of his opponents. When his campaign started to slow (as it often did), he had millions more that he could spend on campaign advertising than the other candidates did, and he was not shy about spending it to swing the election back his way.

CNN did a survey of campaign spending by the end of March, and it's pretty revealing. At that time, Romney had gotten 4.1 million votes and amassed 607 delegates. To get those votes and delegates, the Romney campaign had spent about $76.6 million -- and that doesn't count what the super-PACs spent on his behalf (adding super-PAC spending pushes the total up to about $122 million). Here is what each vote and delegate cost him:

But that's only considering the campaign spending. When the super-PAC money is figured in, the totals go up to:

Super-PAC spending was insignificant for Ron Paul, but his campaign was the least cost-effective in buying votes and delegates.